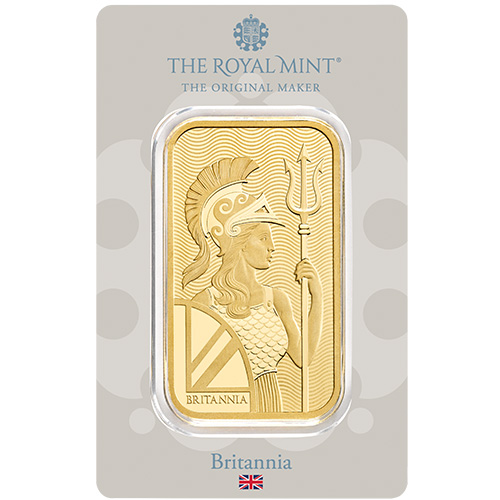 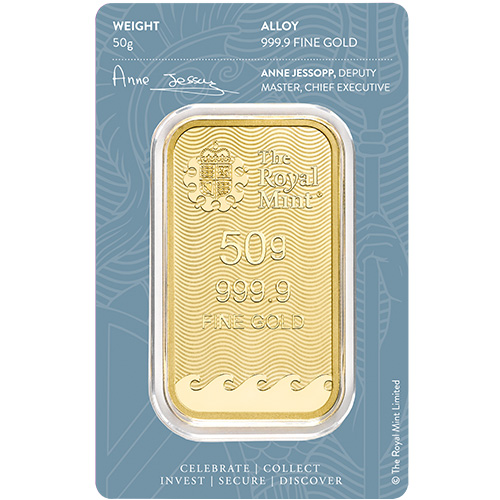 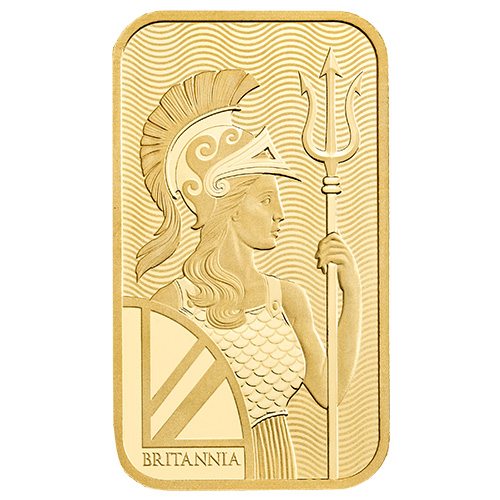 When investing in gold, buyers have many options to choose from. In addition to various mints, there are also numerous weights to consider. Produced by the Royal Mint, the 50-gram Britannia bar in this listing has been crafted in .9999 pure gold and features a beautiful depiction of the female personification of Britain. Today, 50 Gram British Gold Britannia Bars are available to you online at JM Bullion.

Britannia has her origins in the Roman conquest of the British Isles in 43 AD. Essentially an import from Rome, Britannia was inspired by Minerva, the Roman goddess who was in turn inspired by the Greek goddess Athena. Roman Britain used Britannia as a personification of their newly claimed region, but after the fall of the Roman Empire, she became mostly obsolete. However, during the reign of Elizabeth I in the 16th century, Britannia once again became the personification of the land.

On the obverse of 50 Gram Gold Britannia Bars, there is a depiction of the Roman deity looking across the waves. In this beautiful design by Jody Clark, we see the personification of Britain from the waist up in right-profile relief. Following the traditional depictions in coinage and artwork, Britannia wears a Corinthian helmet and holds a trident and shield. The shield is decorated with the Union Flag and is inscribed with the word Britannia.

The reverse side of 50 Gram British Gold Britannia Bars contains the Royal Mint seal and bar hallmarks. The seal features a quartered shield with the words The Royal Mint inscribed beside it. The hallmarks of the bar shown below this include the weight, purity, and metal type. Also included on the reverse are a series of waves and a symmetrical line pattern in the background.

These British Gold Britannia Bars will arrive in brand-new condition in protective blister card packaging. These themed plastic holders include the Royal Mint emblem and the British flag on the front side. On the back, you will find the bar’s assay information.

Please contact JM Bullion with any questions when you buy gold bars. Our team is available to you at 800-276-6508, online using our live chat, and via our email address.