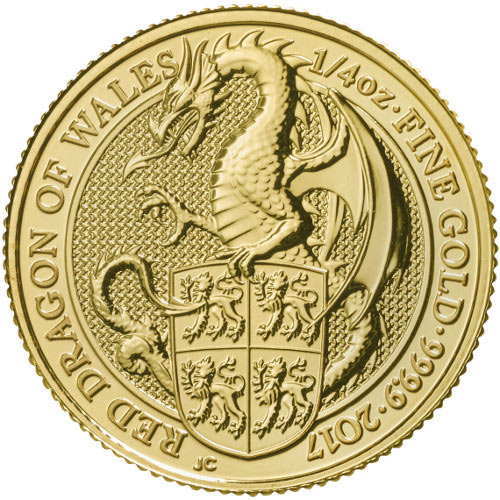 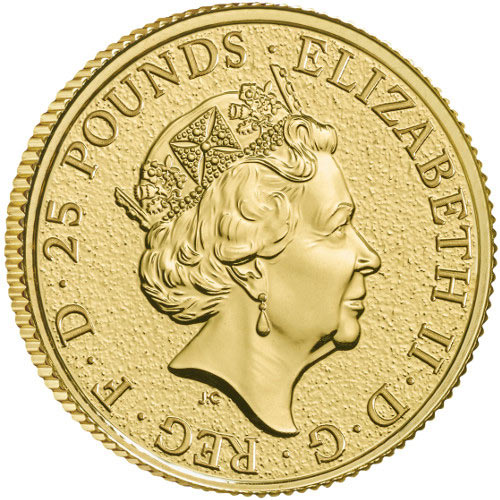 The Queen’s Beast Collection from the Royal Mint is one of the newest offerings in the numismatic community, and it celebrates the statues of English heraldic creatures that were on display at the 1953 official coronation ceremony of Queen Elizabeth II inside of Westminster Abbey. Right now, the 2017 ¼ oz British Gold Queen’s Beast Dragon Coin is available to purchase online from JM Bullion.

All 2017 ¼ oz British Gold Queen’s Beast Dragon Coins in this listing are in BU condition. Coins in BU condition show no signs of wear and tear, though you may notice minor flaws including breaks in the luster, spotted surfaces, and contact marks from the production process at the mint.

The obverse of these gold bullion coins includes the portrait of Queen Elizabeth II as referenced above. Her Majesty ascended to the British throne in 1952 following the death of her father, the king. Her coronation ceremony was held in 1953 and included 10 plaster statues of Queen’s Beasts.

On the reverse of the 2017 1 oz British Queen’s Beast Dragon Gold Coin is the image of the Red Dragon of Wales. The dragon is often depicted holding a shield bearing a lion in each quarter of it, which was the coat of arms for Llywelyn ap Gruffudd, who was the last native Prince of Wales.

Jody Clark is the designer of both images on the Queen’s Beast Collection. In July 2015, Clark (a Royal Mint Engraver) developed the first new effigy of Queen Elizabeth II for British coinage since the 1998 right-profile portrait from Ian Rank-Broadley. Clark, just 33 years old, became the youngest engraver to complete a portrait of the Queen for the Royal Mint and has also been tasked with the creation of the Queen’s Beast imagery.

If you have any questions, please don’t hesitate to ask. JM Bullion customer service associates are available at 800-276-6508, online via our live chat, and at our email address. You can also visit our website to find gold and silver prices today!

Daniel from NY - February 22, 2018
"This was the first gold coin i purchased from JM.It arrived in BU condition and is agem of a coin. The fact that the purity of the gold is 999.9% makes it all the better. I purchased it in December for a fairly decent price.Teriffic job JM.I will be buying more. DANIEL HOOSE. Rotterdam,ny."

Christopher from IL - April 09, 2017
"The coin arrived in perfect condition. How can you not like this series. JM Bullion delivers again and again. The best precious metals dealer out there."