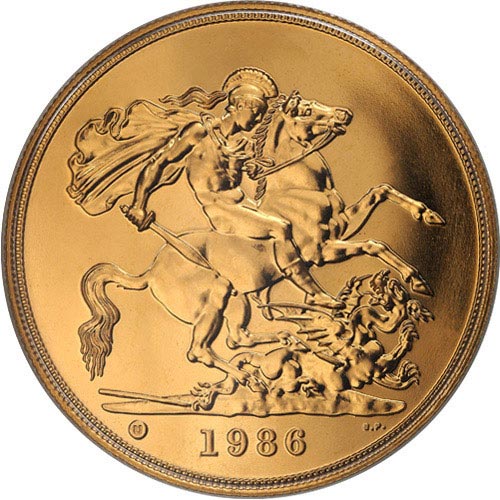 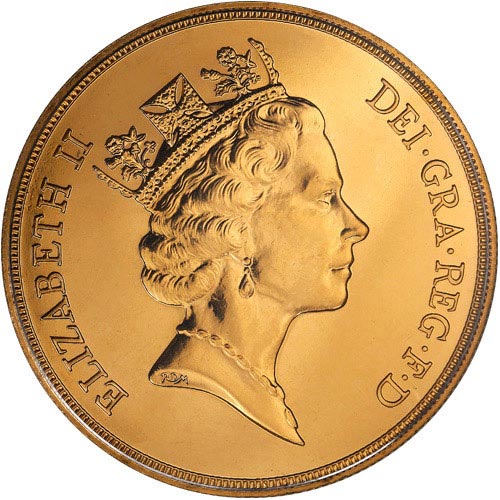 Modern British Gold Sovereign coins were introduced in 1817 and remained in steady production until 1917, with full circulation of the coins as currency continuing until 1932. These gold coins were struck off and on during the 20th century, with a brief one-year striking in 1925 and continuous production picking back up in 1957 during the reign of Queen Elizabeth II.

All 5 Pound British Gold Sovereign coins feature a number of similarities. Though not released into wider circulation like their One Pound, Half-Sterling, and Two Pound mates, these coins feature the same obverse and reverse design concepts of the circulating coins. The reigning monarch of the day is always featured on the coin’s obverse.

In the case of 5 Pound British Gold Sovereigns, only the image of Queen Elizabeth II has ever appeared on the obverse. She is captured in right-profile relief on the coins, with early offerings in the 5 Pound collection including the Maklouf third-generation portrait of the Queen. All coins struck after 1998 feature Ian Rank-Broadley’s fourth-generation depiction of the Queen.

The reverse of all gold sovereign coins, dating back to their reintroduction in 1817, includes a design from Benedetto Pistrucci of St. George and the dragon. The history of St. George and a depiction of him killing a dragon dates back as far as the 7th century, and he is often revered as a soldier saint.

In this listing, you’ll receive a 5 Pound British Gold Sovereign with a random year of issue from the Royal Mint. Gold coins in the sovereign collection are struck by the Royal Mint’s facility in Llantrisant, Wales.

We encourage all JM Bullion customers to contact us with questions at 800-276-6508. You can also contact us online using our live web chat and email features.