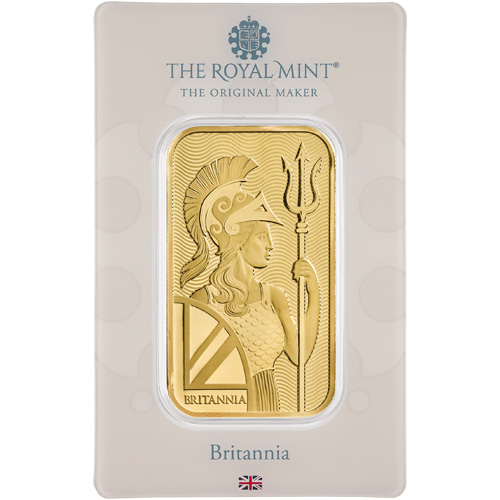 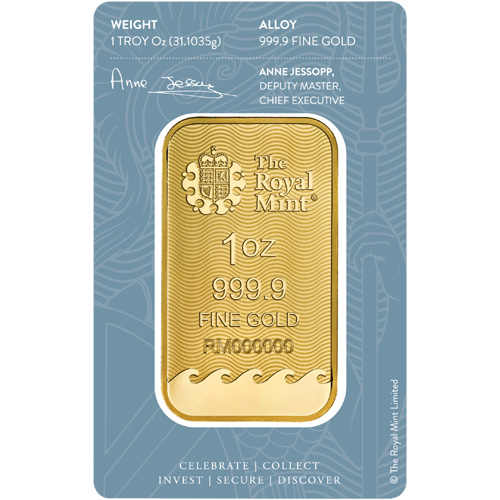 As low as $109.29 per oz over spot!
Add to WishlistLog In to add this product to your Wishlist
Free Shipping on $199+ Orders

One of the finest symbols of Great Britain known to millions around the globe is Britannia. Conceived of more than 2,000 years ago during the Roman occupation of the British Isles and a fixture of British currency for more than 350 years, Britannia gained renewed interest in 1987 with the release of her modern image on the Britannia bullion coins. Today, 1 oz British Gold Britannia Bars are available to purchase from JM Bullion with a classical vision of Britannia.

The all-new 1 oz British Gold Britannia Bar from the Royal Mint of England brings the nation’s most iconic figure to a new platform. An image of Britannia unlike any other seen before, the Royal Mint and Jody Clark worked to come up with a new vision of Britannia befitting this new release while also offering a distinct vision not available on bullion coinage.

All of the 1 oz British Gold Britannia Bars in this product listing from JM Bullion come with tamper-resistant packaging and a unique Assay card. On the bar, you can find the assigned individual serial number.

Britannia is symbolic of the United Kingdom, Great Britain, and the British Isles at large. Her figure first came to the forefront during Rome’s conquest of the Isles. The Romans named the province Britannia and often used the same term to refer to its residents. Over time, she became of symbol of the growing country’s might as it unified itself and projected power outward, while vigilantly defending the homeland.

On the obverse of the 1 oz British Gold Britannia Bar is a right-profile portrait of Britannia with her trident to control the seas and a Corinthian helmet she wears for protection. A portion of her shield is visible which bears upon it the Union Jack flag of Great Britain.

The reverse face of the British Gold Britannia Bar includes the seal of the Royal Mint of England, the oldest continuously operating mint in Europe. The design elements on this side include sea waves at the bottom and a six-digit serial code which starts with “RM” for Royal Mint.

Please feel free to reach out to JM Bullion with your questions about these gold bars for sale. You can call us at 800-276-6508, chat with us live online, or email us directly.

Thor from - September 13, 2019
"Just received the two Britannia bars I ordered about ten days ago. This was my first JM Bullion order, and it went very smoothly. The ACH payment option takes a little longer than a credit card, but it allows for the lowest premium and doesn\'t involve wire fees or a trip to the bank to get a cashier\'s check, so I love it. The bars are in beautiful condition and have a really nice design. I will definitely consider adding more to my collection in the future."