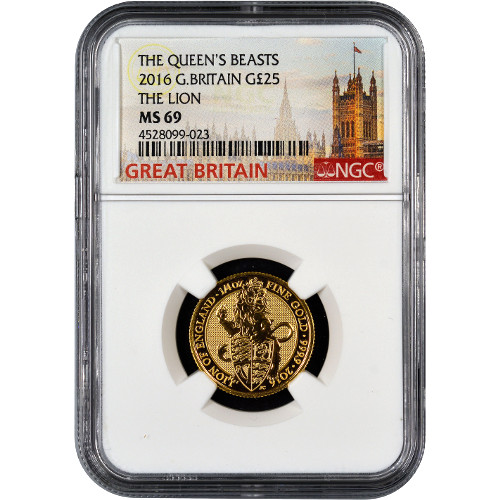 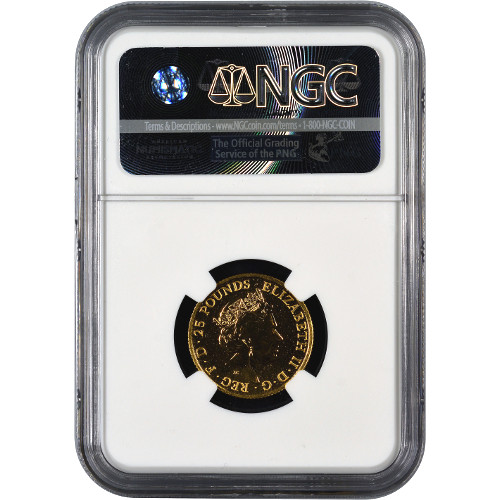 Each 2016 oz British Gold Queens Beast Lion Coin listed here has a near-perfect grade of MS69 from the NGC. Coins with a Mint State 69 grade feature full, original mint luster, but also include a maximum of two minor detracting flaws. These drawbacks are limited to miniscule hairlines or contact marks found only outside the primary focal areas of the design.

The first design in the new Queens Beast collection is the heraldic Lion of England, the most important and visible of the creatures. The lion played a key role in British heraldry, often used in the coat of arms by many knights during the Early Medieval period. Today, the nation’s football team is often referred to as the Three Lions, a nod to the use of three lions on the country’s heraldic shield.

On the reverse side of each 2016 1/4 oz British Gold Queens Beast Coin you’ll find the image of an imposing lion standing on its hind legs, with one paw clutching the coat of arms of the Royal Family and the other paw poised to strike at the nation’s enemies.

The obverse of all British Gold Queens Beast coins features the all-new right-profile portrait of Queen Elizabeth II. Her Majesty’s portrait has been updated three times now since her coronation in 1953. The latest, introduced in 2015, comes from Royal Mint engraver Jody Clark, who created the images on both sides of this coin.

The Royal Mint is one of the worlds foremost producers of gold and silver bullion products. Originally founded in London, it now features numerous locations in the United Kingdom and an authorized facility in India.