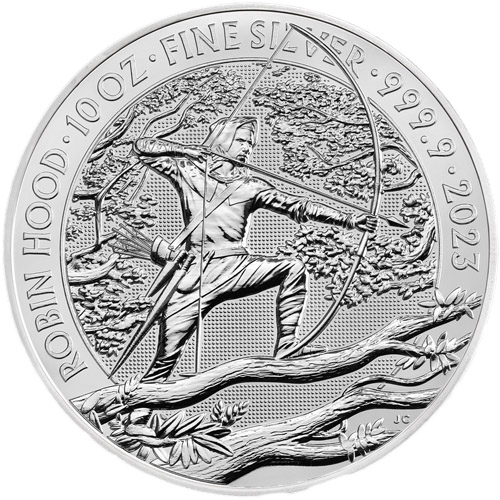 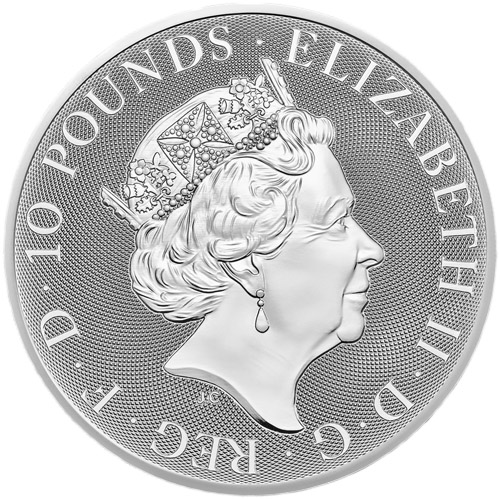 As low as $6.99 per oz over spot!
Add to WishlistLog In to add this product to your Wishlist
Free Shipping on $199+ Orders

Two years after the start of the Royal Mint’s Myths and Legends Series, the British mint is back with some of its popular designs in a new format. In 2023, the first design from this collection returns on a 10 oz silver coin. Right now, 2023 10 oz British Silver Robin Hood Coins are available to purchase online from JM Bullion.

Each 2023 10 oz British Silver Robin Hood Coin is part of the new Myths and Legends Series from the Royal Mint. These particular coins are in Brilliant Uncirculated condition and arrive with either plastic capsules or boxes of 15 coins.

Robin Hood was the first design for the Myths and Legends Series that started in 2021. The collection offers new reverse designs featuring images of the legendary, mythical Robin Hood and members of his Band of Merry Men, including Little John and Robin’s love interest, Maid Marian.

The obverse side of the 2023 British Silver Robin Hood Coin comes with a depiction of Her Majesty, Queen Elizabeth II. The Queen is captured here in right-profile relief wearing the George IV State Diadem Crown. This design was created in 2015 for the Royal Mint by Jody Clark.

On the reverse field of 2023 10 oz Silver Robin Hood Coins, you will find a depiction of the man known to prowl Sherwood Forest. Robin Hood is depicted on the branch of a tree as he takes careful aim at his target using his bow and arrow.

In British folklore, Robin Hood is a skilled archer and swordsman who, in some versions of the tail, served with King Richard I in the Crusades. Returning to a Britain that was in turmoil, Robin used his skills as an archer to steal from the rich to give to the poor. In particular, he targeted tax collectors who were stripping the poor of Britain to support Prince John.