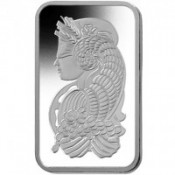 Platinum and palladium have been around for quite some time, but just recently have started breaking into the mainstream precious metals industry. If you’re looking to buy these rare metals, then you’ll want to learn more about them before investing. Whether you’re a first-time buyer or a seasoned veteran, take a look at these quick facts to make an informed platinum or palladium purchase.

Platinum is a precious metal used in everything from the automotive industry to designer jewelry, but it wasn’t always thought of this way. During the 17th century, traces of platinum lined the gold mines in South America, and the Spanish miners considered the metal a nuisance. Now, those in the precious metal industry know that platinum is extremely rare—even more so than the gold the conquistadors tried to extract all those years ago.

Nearly half the yearly supply of platinum goes to the auto industry in the form of vehicle emissions control devices. A powdered form of platinum is used as a catalyst in the ignition of hydrogen in the catalytic converter on your car. Close behind is fine jewelry, accounting for around a third of the platinum mined each year. Other, lesser-known uses include medical machinery electrodes — such as those in oxygen sensors — as well as parts of turbine engines, and of course, investment.

Palladium is a platinum group metal, and though it is often confused for its counterpart, palladium is a separate elemental metal. Because of its likeness to platinum, palladium is also used as an industrial catalyst and is a common metal alloyed in the jewelry industry. Palladium and gold alloy, or white gold, is a common and crucial part of the fine jewelry market.

In many industries, palladium is thought of as a substitute for platinum because of its greater abundance. Although the actual amount of available palladium is unclear, palladium is historically a greater bargain when buying for industrial purposes, as it has previously sold for nearly half as much as platinum.

How Are These Metals Different?

Platinum and palladium are nearly identical to the untrained eye. Because of their similar makeup, they react as catalysts to the same chemicals and elements and, when used in jewelry, maintain a bright white color with no tarnishing over time. The differences between the two mainly come down to density and price.

Platinum is much denser than palladium and, because of this, is often recommended for men’s jewelry, as the heavier metal is more durable than silver or gold and may be considered more masculine. In terms of price, platinum’s density allows for more minute manipulation of the metal without breaking.

Both platinum and palladium are used in automotive catalytic converters, electrodes in medical equipment, and in fine jewelry. Platinum is also used in dentistry, in the form of surgical instruments and electrical contacts, as well as in the production of strong, permanent magnets. Palladium is an essential part of white gold, is also used in the production of dental equipment, and makes up some of the fine workings of high-end watches.

Platinum and palladium’s rarity, coupled with the growing uses for the two metals, makes for great investment potential. For example, if gold mining ceased today, the gold supply would last for nearly twenty-five years. If the same was done for platinum, the supply would last about a year. Because of its similarities with platinum, palladium shares the market with those seeking to buy platinum. The price of palladium is volatile and unpredictable — giving investors ample opportunity for speculative profit.

Because of their uses, aesthetic appeal, and investment potential, platinum and palladium should be all sold out, right? Not quite. Platinum and palladium, though fantastic precious metals with great investment potential, aren’t as popular as silver and gold. Because of the very small supply, the prices of these metals are more volatile than the prices of silver and gold, making them less popular with casual investors.

Platinum and palladium bullion are often available in 10-ounce bars. These bars feature beautiful designs and are of the highest quality, so you can enjoy your investment aesthetically, while having the peace of mind that it’s serving your investment portfolio well.

Whether you’ve been thinking about buying platinum or palladium for a while, or are just now learning the difference between the two, you can feel confident that your purchase will be as simple as possible. Check out JM Bullion’s full selection of platinum products, including our platinum bars and platinum coins today.