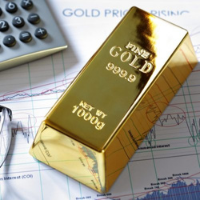 The following is a broad look at US dollar M1, M2, and M3 totals vs the price of Gold Bullion.

First we will begin by defining M1, M2, and then M3. Finally we conclude by examining gold’s price vs these three monetary aggregates to get a vision of where gold’s future price might go.

Often experts refer to the US dollar M1 figure as containing the most liquid parts of the money supply as it contains cash (physical fiat currency notes and coins) and other liquid financial assets that can be quickly converted to physical cash.

Below is a late March 2017 chart showing US dollar M1 at over $3.4 trillion dollars.

Often experts refer to the US dollar M2 figure as containing all the elements of M1 as well as ‘near money’ assets like bank savings deposits, mutual funds, money market securities, and other time deposits. These near money financial assets are less liquid than M1 and not as suitable as exchange mediums, but during normal financial times ‘near money’ can be quickly converted into cash or checking deposits.

Below is a late March 2017 chart showing US dollar M2 figure at over $13.4 trillion dollars.

On March 23, 2006, the Board of Governors of the Federal Reserve System will cease publication of the M3 monetary aggregate. The Board will also cease publishing the following components: large-denomination time deposits, repurchase agreements (RPs), and Eurodollars. The Board will continue to publish institutional money market mutual funds as a memorandum item in this release. – source Federal Reserve

The Federal Reserve (the central bank of the United States) stopped publishing M3 in 2006. US dollar M3 is a total measurement of the US dollar money supply which includes both M1 and M2, as well as institutional money market funds, short-term repurchase agreements, large time deposits, and other larger liquid assets. The US dollar’s M3 measurement includes assets that are less liquid than other components of the money supply (mainly M1 and M2) that are referred to respectively as ‘near money’ and ‘near, near money’ respectively. The additional aggregates of M3 are more closely related to larger financial institutions and corporate finances than to those of small businesses and individuals.

Below is a late March 2017 chart showing US dollar M3 figure at over $17.5 trillion dollars.

In the following late March 2017 chart we can see all three monetary totals for US dollar M1, M2, and M3 respectively displayed over a 47 year time span.

Notice the large drop in M2 and M3 during the onset of the 2008 Financial Crisis and the resulting high rates of increase in all three monetary aggregates in response to the crisis.

US Dollar Monetary Base Versus Gold

The final following chart of this article is a near 100 year illustration of US dollar monetary base versus the US dollar price of gold per troy ounce. Many times in history there has been a flight to the safety of holding gold bullion in place of US dollars (both during times when the US dollar was partially backed by exchangeable gold coin in the early 1920s and even when US dollar cash notes became a fully fledged fiat currency and no longer exchangeable for gold bullion coin circa the 1970s and early 1980s).

These historic flights to quality eventually culminate with the US dollar price of a troy ounce of gold hitting levels large enough to achieve a 40% to a 100% backing of US dollar notes vs the total value of official gold purportedly still held by the US government (8,133.5 tonnes or 261,492,025 troy ounces of gold bullion).

Gold Accounting for US Dollars Outstanding

The presumption many monetary historians draw from this chart is that during times of serious financial uncertainty, human beings demand, buy up, and own physical gold due to its historic performance as a safe haven money of final resort. In doing so they dramatically bid up gold’s value versus paper (and now digital) representative stores of value like the US dollar.

What this US dollar monetary base versus gold price chart may portend is that sometime in the nearing future, the US dollar will again lose value to an ounce of gold bullion as investors revert back to the monetary asset that has often proven itself a dependable safe haven during financial crises and panics. Ultimately a $1,250 oz gold price in US dollars may be deemed a real value by future generations.