What Is The NYMEX? 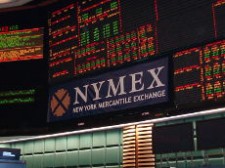 The NYMEX, or New York Mercantile Exchange, is one of the leaders when it comes to commodities trading. The NYMEX is now owned and operated by Chicago’s CME Group. The exchange came from humble beginnings. In 1872, several Manhattan dairy merchants got together and created the butter and cheese exchange of New York. Eventually, this exchange also began trading eggs. In 1882, the exchange added additional trading products such as poultry, canned goods and dried fruits. As the exchange started to grow this year, its name was changed to the New York Mercantile Exchange.

Although there had been other exchanges around the country, the amount of business that the NYMEX handled began to grow as centralized warehousing took hold. This growth in cities such as New York and Chicago led to many of the smaller exchanges of the time going out of business. The COMEX division of the NYMEX came to be in 1933 when the New York Hide Exchange, the New York Rubber Exchange, The National Metal Exchange and the National Raw Silk Exchange all merged.

The NYMEX has had an interesting past. Perhaps, one of the low points for the exchange was back in the 1970s when the exchange was involved in the potato bust. Potato futures had been a large contract traded on the NYMEX. The potato bust involved an Idaho potato magnet going short a large number of contracts. A large amount of contracts went unsettled at expiration, and there was a corresponding default on delivery of those contracts. The public was not happy with the situation and brought it before the newly formed Commodity Futures Trading Commission.

The NYMEX was barred from not only trading potato futures, but also from entering into any new areas that the exchange hadn’t been involved in previously. The exchange suffered a huge blow to its reputation. It is the exchange’s job to guarantee performance on contracts that it lists — and the NYMEX had failed to do that. Obviously, if the exchange could not venture into new areas, its prospects for growth were also severally damaged.

NYMEX Turns It Around

The NYMEX was eventually able to turn the situation around, however. The exchange was able to revamp its heating oil contract when heating oil became deregulated. The exchange was also later able to design and start trading on a new crude oil contract, the WTI or West Texas Intermediate. Eventually, the exchange also began trading Brent oil futures, as well as futures on natural gas. The exchange was hugely successful in its energy products. The exchange trading floor was a place of huge potential opportunity where anybody regardless of education or background could potentially strike it rich. The business grew and grew, and eventually in 1994 the NYMEX and the COMEX exchange merged.

In the early 2000s, electronic trading began to take more of a foothold on global markets. In addition, the Intercontinental Exchange, or ICE, also began to compete with the NYMEX for business. In 2006, the NYMEX began trading futures electronically through the Chicago Mercantile Exchange’s Globex platform. During this time, the energy pits of the NYMEX saw a large reduction in trading volumes and floor personnel.

In 2006, the NYMEX underwent an initial public offering (IPO) and was listed on the New York Stock Exchange. Some exchange executives saw their net worth increase by millions as a result of this IPO. In addition, some of the seat owning exchange members also saw their net worth skyrocket very quickly on the IPO. Eventually, the NYMEX was sold to the Chicago Mercantile Exchange in a highly debated transaction that took months and months of negotiating. In August 2008, the CME acquired NYMEX Holdings Inc. for $11.2 billion in cash and stock.

The NYMEX division deals primarily in the trading of energy futures such as West Texas Intermediate crude oil, natural gas, heating oil, gasoline and even electricity. In addition, platinum and palladium futures are traded on the NYMEX, as well. The Comex division deals in the trading of precious metals, as well as base metals. These contracts include gold, silver, copper, aluminum and various options on many of these contracts.