Gold & Silver as a Percentage of Global Assets 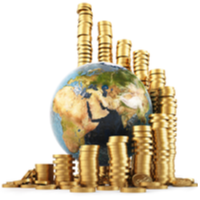 For many millennia gold has served mankind as a monetary asset, a financial asset, and as a valuable commodity. In the late 1960s and early 1970s, the world moved away from using gold as the international monetary system’s choice for balance of payment settlements. What followed was a decade of currency crisis, periods of high price inflation, and market volatility. The US dollar’s value, often deemed as “good as gold”, came under severe scrutiny. The gold price per troy ounce in US dollar terms exploded from a once fixed price of $35 oz to over $800 in early 1980.

Today, physical gold bullion bars are still used as monetary reserves by governments and their central banks, but gold is no longer the “anchor” of any fiat currency system in existence today. Whether this fact changes in the future or not remains debatable.

What we will examine below is gold (and silver’s) share of global wealth today. Credit Suisse estimates total world wealth in terms of US dollars to be $256 trillion. This estimation does not take into account exotic derivatives whose size and scale dwarf even the aforementioned figure. If you squint your eyes hard enough, you can likely make out the thin golden layer at the top of the 2014 bar in the chart above. Can you make out which financial asset classes are expanding most in that 34-year graph?

Once the final ties from gold to currency were severed, gold was deprecated and reduced as a financial asset. This was not mainly due to a fall in gold’s value but more so due to an aggressive expansion in other forms of modern day wealth (e.g. equities, private and public bonds / debts, currency supplies, bank deposits, money market funds, etc.). Today the world is consistently achieving record financial asset and debt levels, many are calling into question the solvency of many entities (mainly western governments) ultimate abilities to pay back record IOUs and promises made. Ultimately many bullion buyers today are betting that John Exter’s pyramid will be proven sound and that the value pendulum will swing away from paper and debt asset values back towards the favor of the historic physical monetary metal of gold (and thus by association also enhance silver bullion’s future values too).