What Are Graded Coins? 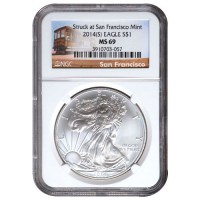 Prior to the advent of the current coin grading system, all coins fell into one of two grades: new or used. Because this rudimentary grading system revealed little useful information about the coin’s actual condition, numismatists developed a more nuanced shorthand to describe a coin’s appearance and value. Now, the term “graded coin” refers to one that experts have evaluated for its rarity and condition to determine its value.

To assign a grade to a coin, numismatists analyze its coloration, strike, luster, surface preservation, and eye appeal. The objective of the grading process is to estimate a coin’s value as a collector’s item. In the United States, coins are graded according to the Sheldon Coin Grading Scale, which can be applied to gold or silver coins, as well as new or old coins. And, while their melt value is typically the more important figure, bullion coins can also receive grades.

In the 1950s, William Sheldon invented the Sheldon Scale, which is a 70-point coin grading scale developed using the relative value of a 1794 Large Cent, worth $1 in Basal State and $70 in Uncirculated MS-70 (See the bulleted list below for definitions of these two grade terms).

To grade a coin, numismatists must first have a bright light source and a magnification device of 5x-8x. Next, the coin’s condition is examined to assess the extent of its circulation, if any. Finally, numismatists compare the coin to the Sheldon Scale (which is synopsized below) to determine its grade.

It is worth noting that there are several grades in between MS60 and MS70 which each represent their own unique grade. As the MS number increases so to does the coin’s condition. Each coin designated with an MS grade is considered to be in Mint State condition. Many modern bullion coins such as the Silver Eagle, Silver Maple Leaf and Silver Panda will often grade between an MS60 and MS70 unless they have been heavily circulated.

Often, designations such as “proof” or “first release” come with grades. Note that these designations are types of coins, not grades. Because they are made just for collectors, proof coins are not circulated. They are struck using a unique, top-quality minting process and commonly have frosted devices and mirror-like fields. Likewise, first release (or early release) coins are those received by a depository within 30 days of their official release.

Today, many companies offer coin grading services, however, there are often two companies that are preferred by collectors. These two companies are the NGC (Numismatic Guaranty Corporation) and the PCGS (Professional Coin Grading Service).

Based in Florida, Numismatic Guaranty Corporation (NGC) is the biggest third-party coin grader by volume in the world. To date, the company has graded more than 30 million coins. The official grading service of the American Numismatic Association and Professional Numismatists Guild, NGC employs close to 30 full-time graders. In addition to traditional coin grading services, NGC offers specialty services in collector coin photography as well as shipwreck and bullion coin certification.

NGC assigns two graders to each coin that it receives, and they grade the coin according to the Sheldon Scale. However, NGC will not grade counterfeit or altered coins. Once a coin is graded, NGC sonically seals it in a plastic holder, or slab, along with a label identifying the coin and its grade. The slab is made of inert material so as not to damage the coin.

Founded in Newport Beach in 1985, Professional Coin Grading Service (PCGS) began as the effort of seven coin dealers who wanted to standardize coin grading. The company offers grading, restoration, and authentication services and has graded 24 million coins worth a total of more than $26 billion to date. PCGS also offers additional programs, such as First Strike and TrueView. First Strike provides collectors with a designation for coins produced in the first month of the mint’s release, thereby enhancing the value. TrueView, a coin photography service, sends owners high-resolution photos of their coins through email.

PCGS grades coins according to the Sheldon Scale and then places them in a plastic holder with a holographic emblem on the back to fight counterfeiting. On the front, PCGS lists the coin type, grade, denomination, serial number, and a bar code. While PCGS will not grade damaged, improperly cleaned, or altered coins, they will still certify them as genuine.

Value and Availability of Graded Coins

For the most part, graded coins have a higher numismatic, or collector, value than melt value. A coin’s melt value refers to its intrinsic value for the precious metals that it contains rather than its worth to collectors, which is what grading helps determine. In terms of availability, collectors can buy graded coins from most purveyors of gold and silver products. However, graded coins are typically more expensive than other coins due to the reliability and value of the information that the grade provides.

The current 70-point grading system empowers collectors with full knowledge about the condition and value of the coins that they buy. Coin grading ensures consistency in pricing and guarantees authenticity. Collectors familiar with the Sheldon Scale can use the information to more accurately gauge what a coin is actually worth.