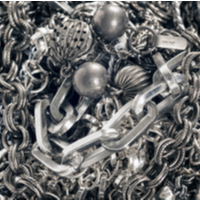 Accounting for approximately 25% of annual silver demand, silver jewelry and eating utensils have long been prized for their brilliant luster and easy workability. A rising gold price and growing markets for mid-priced jewelry have led many jewelry and fashion designers to turn to silver as their medium of choice.

Pure silver, also known as .999 fine silver, is highly tarnish resistant but too soft for use in jewelry. For this reason silversmiths often alloy fine silver with other metals like copper, to harden it.

For example, sterling silver is 92.5 % silver and 7.5 % copper. Sterling silver is a silver jewelry standard in many countries and has been since the 14th century. This popular alloy is ideal for silver earrings, silver bracelets and silver necklaces because its durability ensures pieces will stay securely fastened when worn.

Approximately 50% of the annual silver supply is used in industrial applications.

Silver is 2nd only to oil in the amount of industrial applications this precious metal is used for our day-to-day conveniences. In other words, without silver you wouldn’t be reading this awesome report. You’d be too busy hunting and gathering food!

This affordable white metal has 1000s upon 1000s of modern-day industrial uses in:

That said, silver’s industrial demand is virtually inelastic to price spikes due to the small amounts of silver utilized in the aforementioned industrial applications. In other words, even if the price of silver goes to hundreds of dollars per ounce, smartphones and laptop computers will still be using silver in their production and designs as the cost per unit will easily be passed on to the end-using consumer.

One of the most silver intensive industrial applications is in solar. The average solar panel actually uses about 2/3rds of a troy ounce of silver (20 grams). At around $20 an ounce, this example contributes more to the cost of solar than it does to the other industrial products that use silver.

For instance a laptop only contains 0.75 to 1.25 grams of silver while a cell phone contains just 0.2 grams of silver, so silver is but a tiny fraction of the cost of those electronic devices. Without silver in my computer’s keyboard, I wouldn’t be have been able to type these words you are now reading. Silver is essential to our modern day life.

Investment grade .999 fine silver bullion now accounts for roughly 25% of annual silver demand. This silver investment demand is a recent and growing phenomenon, partly due to the financial crisis of 2008 (where the average American lost about 40% of their wealth on paper) and partly due to the Internet’s ability to communicate the incredible fundamental investment factors of silver (increasing demand, shrinking supplies, potential future monetary crisis).

Physical silver investment buying has surged over the past decade, accounting in 2003 for only 4% of total silver demand to 25% in 2013 alone. More and more investors are learning about silver and buying bullion. People are relearning the fact that silver has an inherent value that is immutable and permanent. It provides default-proof protection in an investment portfolio, which other paper assets like equities, cash, and bonds cannot provide. Unlike land or real estate, bullion has no annual property taxes or maintenance upkeep. The liquidity of bullion is virtually unmatched by any other assets.

Historically silver also preserves wealth against the ravages of price inflations and fiat currency debasements. During the years between 1971 and 1980 (a decade in which the U.S. dollar lost more than half of its value) silver prices rose more than 38 times. Record silver bullion coin sales volumes have continued to occur even with today’s price of silver at less than half its 2011 price high of near $50.00 USD per ounce.

These silver bullion investors choose to buy and “stack” their silver bullion savings mostly in hand and sometime inside private insured vault accounts operating outside the financial system (in places like Brink’s, Via Mat, Malca Amit, G4S, etc.).

Compared to gold, silver’s price is more volatile due to its smaller, less liquid market coupled with silver’s swinging demand fluctuations between industrial and investment uses.

There is virtually no other asset class today trading at less than half of its 1980 U.S. dollar price. And given the fundamental picture of silver’s growing real world demands and the flaws of today’s world financial – monetary – and banking systems, this growing trend of main street investors opting out of fiat currencies and moving their capital into silver bullion appears to not only be strong and steady… we may be gearing up for a new level ahead altogether.

Below is an even wider look at American Gold & Silver Eagle Coin sales since the 1986 inception of the U.S. Mint Bullion program. Note how in silver eagle coin demand (blue bars), there are basically three stages of buying demand the U.S. Mint has received:

First there is the inception of the coin program which surely excited coin collectors in the mid-1980s. Only then came the dot-com bubble of the middle and late 1990s, taking away most investor’s attentions.

Then around 1999, there was the Y2K (year 2000) fear phenomenon, which swept many doomsdayers into frenzy. Couple concerned people’s Y2K Mad Max narratives and the growing ability of the internet to spread not only messages of concern, but also to communicate fundamental investment knowledge (e.g. Ted Butler’s work) about silver and gold investing.

Remember too that in the year 2000, the U.S. dollar was strong; we had gas prices at like $1 a gallon. That was the approximate bottom point for bullion values. Then the 9/11 tragedy happened, we doubled down on wars, and we got hammered with a barrage of fear cards from terrorists in caves plotting to decimate our cities. The easy credit and lending of the housing bubble kicked in, people felt wealthy, credit was easy and cheap for most middle class Americans which rapidly appreciating on paper home values.

The final level of Silver Eagle coin demand sprang up thanks to the 2008 global financial crisis. At the time many, many losing investors (losing approximately 43% of their wealth) began to see the financial system’s instabilities while investigating the fundamental factors of our entire financial system. I am talking about how it works, how “the sausage is made”, what the system relies upon to function fluidly, where the biggest risks are, etc.

I believe many of these investors who were spurred to buy bullion during the financial crisis of 2008 and 2009, they for the most part understand the fundamental factors for why they bought physical silver (and gold for that matter). Most if asked would say the system has not structurally or fundamentally changed, it has indeed worsened. Many would also say (including myself) that there are more reasons now than ever to be stacking silver and gold bullion while reducing your portfolio’s paper and counterparty risks.

Today it only takes one large daisy-chain of derivatives gone bad to potentially expose the now larger than 2008 insolvent commercial banks who actively use accounting scams to cover their insolvency. We could see a global crisis in the confidence of the world’s bond markets. There is the potential of a G20 round robin of global fiat currency devaluations for we do now have unsustainable debts and entitlement programs in the west which will have to be addressed at some point.

Eventually all the financial and monetary systems must be fundamentally fixed, band-aid central bank solutions, price and media propaganda, they won’t solve the issues long term. In the coming atonement, silver and gold bullion are what many in the public are choosing to hold (my dear reader, you can include me on the list).

The next article in our Beginners’ Guide to Buying Physical Bullion will discuss the supply of silver.