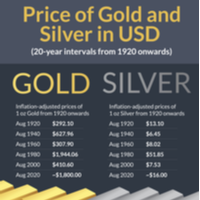 O.K. enough rants on what I don’t trust, what I will never buy, and the whys.

It is time to flip the script, time for positive vibrations.

In physical ounce and USD volume terms, we are smack right in the midst of the greatest gold and silver bull market the world has ever seen. Because of this fact there is plenty of enough demand for honest bullion businessmen to flourish and prosper alongside their hard saving customer bases.

Time to cover a bit on silver and gold’s history and why they are in their greatest secular bull market ever.

Human beings have coveted silver and gold consistently for more than 6000 years.

Gold treasures have been found dating back to as early as 4000 BC in a burial site in Varna, Bulgaria (from the ancient Thracian civilization).

By 3600 BC, Egyptian goldsmiths began melting gold ores to separate the metals inside. They used blowpipes made from fire-resistant clay to heat the smelting furnace.

As early as 3100 BC we have evidence of a gold-to-silver value ratio in the code of Menes, the founder of the first Egyptian dynasty. In the Menes code it is stated “one part of gold is equal to two and one half parts of silver in value.” People began mining silver in 3000 BC in modern day Turkey.

Our ancestors used tonnes of silver fashioning valuable ornaments, jewelry, and eating utensils (this in part due to silver’s duct ability and natural antibacterial properties).

When Spanish explorers arrived in the “New World” of Central and South America (15th and 16th centuries) they encountered different native peoples. The Spanish and Incas had very little in common. Diverse old native Indian cultures spoke entirely different languages than European Spaniards, they worshipped entirely different gods, and they lived very different lives day to day. What they both did hold in common was a high esteem for gold and silver using them to craft some of their life’s most important tangible objects (religious items used in rituals, jewelry for adornment, coins for trade). Gold and silver became de facto money around 600 BC when they were struck in Lydian coins as stores of value used for trade. For over 2500 years, silver and gold monies have proven themselves as the ultimate monies.

Silver & Gold indeed have the best historic track records as money. These two precious monetary metals, by their inherent natures, are human beings’ most excellent monies.

Here are some historic and modern day essential qualities of great money:

On August 15, 1971 the world for the first time began being operated on a 100% fiat currency reserve and faith based monetary system. This was the date when former U.S. President Richard Nixon cut the last ties between gold and the U.S. Federal Reserve note (mistakenly called U.S. dollars to this day).

Today all physical and digital government issued currencies are fiat, their creation conjured by a computer and printing presses. Their values are based on people’s faith and confidence. A study of 775 fiat currencies produced by DollarDaze.org states that there is no record of a fiat currency that has succeeded in holding its value over the long term. Twenty percent or 155 of the fiat currencies examined failed through hyperinflation, 21% were destroyed by war, 12% destroyed by independence, 24% were “monetarily reformed”, and 23% are still in circulation approaching one of the other outcomes.

The study found the average life expectancy for a fiat currency is 27 years, with the shortest life span being one month. The British pound Sterling, founded in 1694, is the oldest fiat currency in existence. At over 320 years of age it must be considered one of the most highly successful fiat currencies ever but note that the British Pound didn’t start out as a full fledged fiat currency.

The British pound was originally defined as 12 ounces of silver, but after Britain ended the pound’s ties to the gold standard in 1931 and the pound’s value precipitously fell. The once proud reserve currency of the world is now worth less than 1/200 or 0.5% of its original value. In other words, the most successful long-standing currency in existence has lost 99.5% of its value.

So it is historic fact that fiat currencies only last a handful of decades typically while they eventually all end worthless. The same cannot be said for silver or gold monies.  About 90 – 95% of all the physical gold ever mined is still with us today. Physical silver, well not so much, but more on dwindling silver supply facts later.

This trend of paper / digital fiat currencies losing their value to silver and gold bullion is showing no signs of slowing down over the long term (throughout this decade).

Humanity is relearning the historic lessons that gold is money par excellence, and that silver is mankind’s most trusted money for day-to-day commerce. These repeat lessons are for the first time in human history unfolding simultaneously on a global scale. I suggest we buckle up and prepare for interesting and possibly chaotic times ahead. The next article in our Beginners’ Guide to Buying Physical Bullion will discuss the fundamentals of gold today.