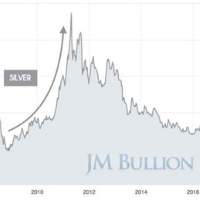 This chart contains the world’s fluctuating spot prices for gold, platinum, and silver beginning in 1970. Palladium pricing begins on the chart starting with CME NYMEX Palladium Futures trading in 1977.

We begin examining 2 separate overnight devaluations of the US dollar in the early 1970s.

The first followed the August 15th 1971 Nixon Shock and resulted in an 11% US dollar devaluation by December 1971.

These two currency value gyrations led both silver, gold, and platinum markets to hit interim bull market highs by 1974 which were followed by multiple years of consolidation. Adding to inflationary pressures at that time was also the first of two 1970s Oil Shocks. In October of 1973 with OAPEC’s embargo of oil exports to the United States. Later in 1979, circumstances in Iran caused the beginning of the second oil shock.

During this same timeframe silver went from around five dollars an ounce to as high as $50 oz on January 21, 1980. To this day, the average layman notion persists that somehow three wealthy Hunt brothers cornered and drove the price of silver into a bubble in early 1980. On the contrary, it’s estimated that some 12 billion ounces of silver existed above ground in 1980 (excluding rare coins, jewelry, and antiquities). At their peak, the Hunt Brothers controlled some 250 million ounces of combined silver bullion and futures contracts (representing some 2% of the world’s physical silver supply). Would you consider that a cornered market?

While the Hunts made a contribution to the $50 oz price spike on January 21, 1980 a simultaneous same day COMEX rule change to “liquidation orders” only for silver futures inevitably led to the subsequent drop in silver (and likely too gold prices) for months to follow.

The Hunt Brothers efforts do not explain the massive price spikes in all three other precious metals in the same reasonable timeframe.

More likely these four precious metals and other commodity price spikes were a confluence of greed, fear, political instability, and high inflationary pressures after decades of deficit spending.

The months to follow, the then Fed President Paul Volcker’s actions helped achieved a record Fed Prime Rate of 21.5% by December 1980. The U.S and Saudi Arabia’s 1974 Petrodollar system agreement and subsequent flooding of the world with US dollar denominated debt issuances which helped garner in an era of financialization the world has never before seen.

A palladium supply disruption in Russia late in the year 2000 caused an all time palladium price record high of some $1,100 oz by January 2001.

By early 2002, fresh palladium supplies from Russia were again being imported and the US dollar spot price of palladium subsequently fell by more than 60% from its 2001 all time record price.

This short term supply crunch and the subsequent price peak of palladium was enough to spook Ford Motor Company employees to over-purchase and hoard palladium stockpiles unhedged to price swings (meaning they didn’t use futures, options, or other financing to offset their price exposure on new palladium inventory stocks they accumulated). Upon the -75% price swing in palladium, the Ford Motor Company had to declare a $1 billion US dollar loss based on this precious metal price swing alone. In 2008 oil price passed $140 a barrel and with it several other commodities were reaching all time high prices as well. By March 4, 2008 the price of platinum hit a record price high reaching over $2,250.00 oz much of it based on supply disruptions from South African mines. At the time platinum was more than two times the value of gold in US dollar terms.

Within a three year timeframe, both precious metals’ spot prices multiplied in value many fold. Investors were and still are, actively buying physical bullion as a haven against potential price inflation, geopolitical turmoil, and further potential bank or financial market failures. Source
Much of the rise in silver and gold spot prices from early 2009 to 2011 was attributed to a decline in the US dollar’s value versus other fiat currencies.

What caused the silver price spike – and crash?

“No one could really give any comprehensive explanation for why the silver price climbed 175% in a year.”

Perhaps we could find a few market motivations in the timeline of events within the next chart. For instance note the dramatic increase from 2008 onwards in money flows buying the world’s most popular bullion coins (the US Mint’s Gold & Silver American Eagle Coins). On March 6, 2009 the Dow Jones Industrial Average hit a low of 6,624.94, a level not since seen since early 1997. And an even deeper reflection of broader equity values, the Wilshire 5000 index, was simultaneously also hitting +12 year low nominal levels.

The Federal Reserve began an emergency and unconventional monetary policy program of Quantitative Easing (QE1, QE2, QE3, etc.) in late 2008, intended to buy government bonds and other financial assets to help bolster the economy. The Fed’s balance sheet has since ballooned from some $900 billion to over now over $4 trillion in total. Most of these funds have not been lent out through the current fractional reserve banking system, but instead remained on bank balance sheets causing the velocity of US dollars to hit all time low marks for the past five years or so.

Including the Federal Reserve, other government-partnered central banks have also taken part in various unprecedented monetary policy programs. Total balance sheets of 9 large central banks stand at an estimated total of over $17.5 trillion in US dollar value.

Many long term bullion buyers steadfastly believe that in the coming decades, silver and gold bullion values will increase as a result of the record levels of monetary aggregates (debt and currency) central banks have been producing worldwide. Often compared to the 1974 spike and sell off in silver and gold price spikes, many bullion bulls today shake off this 2011 spike as mere interim price high and subsequent consolidations. The price consolidations we have witnessed since is possibly setting up what some believe will become a mania in precious metal values ahead.

The 1980 Gold & Silver Bull market mania was back then a western world phenomenon mainly taking shape in London and the United States. This 21st Century version involves more eastern countries, a more wholly connected and larger financial system globally, with a timescale taking perhaps 2 ½ times longer in length to play out than from 1971 to 1980.

Time will tell if we will again see price spikes in various precious metals. Looking back on recent history from 1974 to now, it appears to be more common than the average person may think.