When were Silver Coins Discontinued? 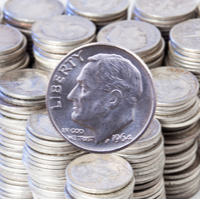 When did silver coins stop and disappear from circulation?

In this article we will review both the issuance and disappearance of circulating silver coins throughout North America specifically the United States, Canada, and Mexico.

For decades following President Roosevelt’s 1934 Silver Nationalization, the United States forced a government mandated silver price on the market which allowed silver coins to have a high velocity of circulation. But by 1959, some silver coin shortages began to cause the Federal Reserve to ration coin allocations to its member banks.

The USA’s 90% silver circulated coins were phased out from being struck by President Lyndon Johnson’s July 23rd signing of the Coinage Act of 1965.

President Johnson said the following on the day of the Coinage Act’s signing:

Now, all of you know these changes are necessary for a very simple reason–silver is a scarce material. Our uses of silver are growing as our population and our economy grows. The hard fact is that silver consumption is now more than double new silver production each year. So, in the face of this worldwide shortage of silver, and our rapidly growing need for coins, the only really prudent course was to reduce our dependence upon silver for making our coins.
—
Since the life of a silver coin is about 25 years, we expect our traditional silver coins to be with us in large numbers for a long, long time.

If anybody has any idea of hoarding our silver coins, let me say this. Treasury has a lot of silver on hand, and it can be, and it will be used to keep the price of silver in line with its value in our present silver coin. There will be no profit in holding them out of circulation for the value of their silver content. President Johnson’s words ring hollow as do the cheaper cupronickel coins that flooded the USA’s circulating coinage supply from 1965 onwards. In the years that followed, the nation sold off the vast majority of U.S. Treasury’s Silver Stockpile.

Of course the US citizenry (as historically happens) chose to circulate the newer less valuable copper-nickel coinage while saving and storing the older more precious 90% silver coinage for the long term.

Even without anticipation of an increase in the price of silver, the proposed change in the Nation’s coinage presumably will result in the operation of Gresham’s law. That law, which describes a phenomenon that has been observed for many centuries before and after it was formulated by Sir Thomas Gresham in the 16th century, states that when two coins are equal in debt paying value but unequal in intrinsic value, the one of lesser intrinsic value tends to remain in circulation and the other tends to be hoarded.

The American public indeed followed Gresham’s Law extracting and saving 90% silver coins from circulation and for good reason. The history of currency debasement spans millennia. The following is but a recent example in the United States. The US Mint issued two commemorative yet debased silver coins to later honor passed US Presidents although both coin’s circulation was limited. There was the Kennedy 40% silver half dollar coins struck from 1965 to 1970. Then from 1971 to 1976, a limited Eisenhower 40% silver dollar coin was also struck and sold to the coin collecting public.

The following graphic is from JMBullion’s Ultimate Guide to 90% Silver Coins. There you can see a few examples of 90% silver coinage formerly issued by the US Mint for the United States’ formerly circulated silver money supply.

Beginning in 1908, the Royal Canadian Mint produced silver coinage for Canada and its citizenry. Within 60 years of opening the Royal Canadian Mint, the cost of issuing silver circulation coins became too cost prohibitive as the face value of the coinage was superseded by silver’s value at the time.

Today the Royal Canadian Mint produces modern silver bullion and collectible coins which we carry in our inventory here at JMBullion.

The first and oldest mint in the America’s is the Mexican Mint which started in 1535 AD. The Spanish Empire began striking the silver real de a ocho coin after 1588. This famous silver coin was also struck at the Mexican Mint and is also referred to as the Spanish dollar of the silver eight-real coin. It and its successor silver coin, the silver peso, were circulated widely throughout the Americas and even Asia well into the 19th century. Spanish silver coins became the basis of many modern national currencies including the United States dollar, the Japanese yen and the Chinese renminbi or yuan. The United States in fact accepted the Spanish dollar as legal tender until the Coinage Act of 1857. Currently the Mexican Mint produces modern gold and silver bullion coins many of which we carry in our inventory here at JMBullion.