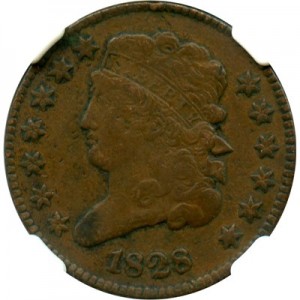 The United States Mint was founded shortly after the nation for which it is named, and was utilized as a means of producing the currency of the newly discovered country. One of the most iconic coins to have ever been produced by the US Mint is without a doubt the Half-Cent, which was first sanctioned by way of an Act of Congress in 1792.

During its first years, the Half-Cent was comprised of pure copper and was valued at 1/200th of a Dollar, or one half cent. Despite what the coin’s face value might lead you to believe with regard to this coin’s size, the reality was that this piece was nearly the size of a modern quarter. Still, with well over 50 years of production, it is clear to see that the Half-Cent was widely circulated and utilized during its time being produced.

The Half Cent never strayed too far from a simplistic design, but the history and stories behind the design itself are anything but simple. The most basic reason for this is due to the fact that the design of the Half Cent changed frequently, with new releases coming every few years during initial production, and every so often after that.

1793 marked the first year during which a Half Cent would be produced, and the coin’s design, which was the brain child of American Henry Voigt, featured a regal depiction of a left-facing Lady Liberty. The woman’s hair was pictured as being slightly windblown, while an overly large bow kept her hair from wildly blowing about. He also championed the initial engraving. Depending on what time of year a 1793 Half Cent was produced, the reverse side will either feature chains or a wreath along with the face value.

Voigt’s use of chains on the coin’s reverse drew criticism that eventually forced the design of the coin to change. While this style of Half Cent was not popular when it was produced, coin enthusiasts today will pay top-dollar for one of these rare pieces.

After the 1793 release of the Half Cent proved to be a major falter in the young US Mint’s glide, they decided that the next release should be altered to some extent. On the reverse remained a wreath, only the version of the wreath on the 1794 release was much more extravagant in its design than the wreath engraved into 1793 edition. After Voigt’s errors in 1793, Mint director David Rittenhouse hired Joseph Wright to design the obverse of the 1794 Half Cent. Keeping with tradition, Wright also depicted Lady Liberty on the coin’s obverse, but unlike the 1793 version, her hair was well maintained and adorned with a Phrygian cap—a historic symbol of freedom. The more extravagant wreath was unique in that it could be identified as being a Laurel wreath. 1793’s wreath-type is unknown to this day.

Wrights 1794 design proved to be decently well-received, and maintained in production for another few years before again being replaced by the Draped Bust Half Cent.

In 1796, Robert Scot flipped the US Mint on its head by completely redesigning much of its currency, including the Half Cent. Lady Liberty could still be found on the coin’s obverse, but she faced to the right and appeared to be much more mature and composed than ever before. Lady Liberty still had a ribbon in her hair, but it was much smaller than the one found on the 1793 coin. In addition, she sports luxurious garments near her bust, hence the design being called the Draped Bust design. A wreath was also maintained on the coin’s reverse, but it was now changed to be an olive wreath.

After a few more years of production, the Half Cent once again underwent change when John Reich was tasked with the new design in 1808. This new design is most commonly referred to as the Classic Head design and features a left-facing Lady Liberty boasting headgear not very dissimilar to a crown. More appropriately, this headgear is known as a fillet and is rumored to be designed after the crown given to the best male athletes of Ancient Greece. New copper was introduced starting with the 1808 Half Cent, and because of its high purity and resulting softness, these coins were more prone to wear and tear than those of previous years.

Scot’s design did not even last 10 years before he submitted a redesign for the 1816 Half Cent. Lady Liberty managed to look even more mature than before, and this is why the design has come to be known as the Matron Head or Coronet Cent.

In 1835, a new chief engraver by the name of Christian Gobrecht was at the helm of the US Mint, and altered the design of the Half Cent coin. Fed up with an older Lady Liberty, Gobrecht decided to reverse-age her and fashion her hair into a tight braid. All in all, these subtle design changes gave Lady Liberty a much younger, invigorated look. This design was held in high regard by the public and remained on the coin unchanged until the Half Cent was done away with in the late 1850s.

The Half Cent is an important piece of American history and also something collectors are constantly trying to get their hands on. With so many different designs minted across a wide number of years, there are plenty out there for collectors to get ahold of too. Unfortunately, due to the undeniable age of some of these coins, they are quite difficult to find in great condition…but that does not mean they do not exist.

For collectors, there are few challenges greater than putting together a complete collection of American Half Cents. These coins were minted for more than 60 years, many more than 200 years ago, and there are only a limited number having survived to this day. Still, the coins are out there and so long as that is true, collectors will not cease their search.

Everything goes back to the age of these coins, and it is the historical value of the Half Cent (especially those minted in the 1790s) that plays the biggest role in determining value. Because many surviving samples are in fairly poor condition, it is not so much of a concern if a given Half Cent is not in absolutely perfect condition. With that said, condition is never overlooked by collectors. This is especially true when assessing the condition of Half Cents that were minted in the mid-1800s.