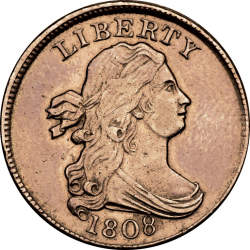 The 1808 Draped Bust Half Cent is a coin that serious and amateur collectors both strive to get their hands on. The fact of the matter is that the number of these coins still available for purchase is quite small. Understanding this, there has never been a better time than now for you to get your hands on one of these coins.

On the obverse side of the 1808 Draped Bust Half Cent, the central image is that of Lady Liberty. Lady Liberty is depicted facing rightward and the image is so detailed that even the contours of her face can be identified. Above the central image is an inscription which reads “Liberty,” while the 1808 year of minting can be found underneath the image. Around the very outer edges of both sides of the coin you will notice raised notches which give the coin a bit of added texture and aesthetic appeal.

Grading the 1808 Draped Bust Half Cent

For collectors, the unfortunate reality that they must face in the modern coin market is that there are counterfeits everywhere. The 1808 Draped Bust Half Cent is no exception, and there are ways collectors protect themselves from falling victim to a scammer. For one, they will only purchase coins that have been graded and certified as being authentic. Below, we have outlined the different coin grades as well as what they mean.

Uncirculated: If a coin is determined to be of Uncirculated grade, this means that the piece in question never made it out onto the open market nor exchanged hands. As a result, these coins will look today exactly as they did when they were first minted.

Extremely Fine: A coin that is determined to be of Extremely Fine grade is one that is perfect save for a few minor flaws. You will notice that these pieces might play host to a few scratches, but will, for the most part, be in solid condition; especially when you consider their age.

Fine: Fine is the grade given to coins that have been circulated quite a bit, but are still in pretty solid condition. These pieces will show some signs of damage, such as scratching and some light smoothing, but apart from that will look to be decently well-preserved.

Good: Good is the worst grade a coin can receive and is indicative of a piece that has been both heavily circulated and heavily damaged. These pieces will be complete with deep scratches, large chips, and smoothing so severe that some of the surface imagery will have been worn away.

Pricing the 1808 Draped Bust Half Cent

When it comes to figuring out how much you might be asked to pay for an 1808 Draped Bust Half Cent, this is something that can be done by first assessing the condition the coin is in. Naturally, the coins that have been well-preserved are going to fetch a higher asking price than those coins that have been heavily damaged over the years. Below, we have a chart aimed at giving you a better idea of what you might be asked to pay for a graded 1808 Draped Bust Half Cent.