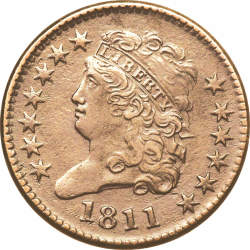 The 1811 Classic Head Half Cent is a coin that collectors are particularly interested in due to it being the last coin before the Half Cent took a bit of a hiatus. After the 1811, it was almost 15 years before another Half Cent was produced. Thanks to this hiatus, the 1811 Half Cent is one of the most popular Half Cents out there on the market today. Being that the coin is so old, however, there are only a limited number remaining.

On the obverse side of the Classic Head Half Cent, the image of Lady Liberty, facing rightward, is taking up a large majority of the center. Lady Liberty is wearing a band on her head, and within that band the word “Liberty” is inscribed. To both the left and right sides of the central image you will notice a total of 13 stars, representative of the 13 original colonies of the United States. Underneath the central image you will find an inscription marking the 1811 year of minting.

On the coin’s reverse, the center is marked by the “Half Cent” face value inscription. Surrounding this central inscription is a completely circular wreath, tied together by a bow. The wreath itself is a bit more detailed than in previous editions of the coin. Finally, there is an inscription on the outside of the wreath that reads “United States of America.”

Grading the 1811 Classic Head Half Cent

For collectors, the unfortunate reality of today’s market is that there are going to be counterfeits, especially for coins that are highly sought after. Being that this is the case, collectors are only going to want those coins that have been graded and certified as being authentic. Below, we have outlined the different coin grades as well as what they mean for the appearance of the Classic Head.

Uncirculated: If a coin is determined to be of Uncirculated grade, this means that the piece in question will have been kept in great condition from the day it was minted until today. Having been kept from the open market for more than 200 years, these coins will appear today just as they did back in 1811.

Extremely Fine: A coin determined to be of Extremely Fine grade is one that might have a few scratches or chips, but will otherwise be in flawless condition. These coins will appear perfect to the naked eye, but closer inspection will reveal a few minor flaws.

Fine: Fine is the grade given to coins that have been circulated quite a bit over the years. These pieces will show some consistent, light scratching, but their surface imagery will have been preserved. All things told, these pieces will still be in decent shape.

Good: Good is the worst grade a coin can receive and is indicative of a piece that has been both heavily circulated and damaged. The surface imagery of these coins will have been worn down quite a bit, so much so that some items may be difficult to make out with the naked eye.

Pricing the 1811 Classic Head Half Cent

In terms of determining a price for the 1811 Classic Head Half Cent, this is something that can most easily be done by assessing the condition the coin is in. Naturally, if the coin is better preserved than others being sold, it is going to catch a higher asking price. Below, you will find a chart aimed at giving you a better idea of what a graded 1811 Half Cent might cost.