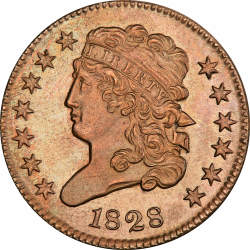 The 1828 Classic Head Half Cent is a piece that collectors of all types will do anything to get their hands on. The fact of the matter is that these coins have been around for a long time, and because of this there is only a limited quantity remaining. Knowing this, there has never been a better time than now for you to get your hands on one.

On the obverse side, the imagery you will see is that of Lady Liberty facing leftward. Resting atop Lady Liberty’s head is a metal band, and within that band is inscribed the word “Liberty.” On the left and right sides of the central image you will notice 13 stars which represent the 13 original colonies of the United States. As far as the 1828 Half Cent is concerned, there are some editions with 13 stars as well as a few that have only 12 stars. Finally, the 1828 year of minting is inscribed towards the bottom of the obverse.

On the coin’s reverse side, the “Half Cent” face value is inscribed in the center. Surrounding this is a circular wreath that is bound together by a bow. Around the outside of the wreath itself is another inscription, reading “United States of America.” Finally, it must be mentioned that the very outer edges of both the obverse and reverse sides of the coin are marked by raised notches, which give the coin a bit of added texture.

Grading the 1828 Classic Head Half Cent

For collectors, it is no secret that coins as old and as popular as the 1828 Half Cent are counterfeited quite frequently. While this is an unfortunate reality, collectors can protect themselves by only purchasing the coins that have been graded and certified as being authentic. Below, we have outlined the different coin grades as well as what those grades mean for the appearance of the coin.

Uncirculated: If an 1828 Classic Head Half Cent is determined to be of Uncirculated grade, this means that the coin was never circulated. Rather than exchanging hands over the years, these pieces will have been kept in safekeeping. As such, these pieces will look today exactly as they did back in 1828.

Extremely Fine: A coin that is determined to be of Uncirculated grade is a coin that is in nearly perfect condition save for a few minor flaws. Though these flaws are typically limited to nothing more than a few scratches or chips, it is enough to downgrade the coin.

Fine: A Fine Half Cent is a coin that was circulated for a period of time, but taken out of circulation before too much damage could occur. The surfaces of these coins will show scratching and maybe even some smoothing, but the raised inscriptions and imagery will still be intact.

Good: Good is the grade given to Half Cents that have been both heavily circulated and heavily damaged. These pieces will show significant smoothing and scratching, so much so that some of the raised aspects of the coin will have been completely compromised.

Pricing the 1828 Classic Head Half Cent

In terms of determining a price for the Half Cent, this is something that can most easily be done by assessing the coin’s condition. Naturally, and as you might expect, those coins that have been well-preserved are going to fetch the highest asking prices. Beyond the coin’s condition, you should also take note of how many coins are on the market. Below, we have a chart aimed at giving you a better idea of what you might be asked to pay for a graded 1828 Half Cent.