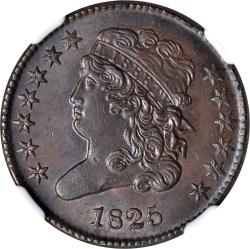 After a brief hiatus, the US Mint decided in 1825 to once again begin producing the Classic Head Half Cent. The coin was popular back when it was first introduced and remains popular today, only almost exclusively amongst collectors. As time wears on, the total number of 1825 Classic Head Half Cents available will decrease, and that makes now the best time to get your hands on one.

On the obverse side of the 1825 Classic Head Half Cent, the image of a leftward-facing Lady Liberty is depicted directly in the center. The image of Lady Liberty is incredibly detailed, and within a band that is resting upon her head you will see the word “Liberty” inscribed. To both the left and right sides of the central image, you will notice a total of 13 stars, representative of the 13 original colonies of the United States. Beneath the central image there is an inscription marking the 1825 year of minting.

On the coin’s reverse, the “Half Cent” face value is inscribed directly on the center of the face. Surrounding the central face value is an ornate wreath, tied together by a bow. You will notice that there is an inscription reading “United States of America” around the outside of the wreath. Finally, the very outer edges of both sides of the coin are marked by raised notches that give the coin a bit of added texture.

Grading the 1825 Classic Head Half Cent

For collectors, the unfortunate fact of the matter is that a coin as popular as the 1825 Half Cent is counterfeited quite frequently. While this is so, collectors will do anything to ensure that they only get their hands on those coins that have been graded and certified as being authentic. Below, you will find a chart aimed at giving you a better idea of what you can expect to pay for an 1825 Classic Head Half Cent, given its grade.

Uncirculated: A Classic Head Half Cent that is determined to be of Uncirculated grade is one that never spent any time on the open market being circulated. These pieces will have been perfectly preserved from the time they were minted up through the modern day. Naturally, their condition can best be described as flawless.

Extremely Fine: If a coin is graded as being Extremely Fine, this means that the piece in question will be almost entirely flawless. Unfortunately, close inspection of the coin will reveal some minor imperfections, such as some small chips or scratches.

Fine: A coin determined to be of Fine grade is one that spent a good bit of time in circulation, but was taken out before too much damage could occur. A Fine 1825 Classic Head Half Cent will be complete with plenty of surface scratching and chipping, but not enough to compromise any of the imagery nor lettering.

Good: Good is the worst grade a coin can receive. These pieces will have been both heavily circulated and heavily damaged. On occasion, the damage present on the surface of these coins is so severe that some of the raised imagery and lettering might have been completely worn down.

Pricing the 1825 Classic Head Half Cent

If you are attempting to figure out the price you might be asked to pay for an 1825 Classic Head, the first—and one of the only things—you need to look at is the condition of the coin. In many ways, it goes without saying that the more well-preserved a coin is, the more expensive it is going to be. Below, you will find a chart aimed at giving you a better idea of what a graded 1825 Half Cent might cost.