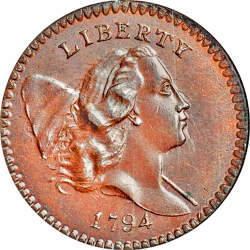 The 1794 Liberty Cap Half Cent is an extremely popular coin for a number of different reasons. For one, it has a design that is slightly different from the year before. Secondly, it is more than 200 years old and represents one of the first coins ever produced by the young US Mint. With so few of these remaining, it should come as no surprise that investors will do anything to get their hands on these coins.

On the obverse side of the Liberty Cap, the central part of the face is dominated by the image of Lady Liberty. As opposed to the 1793 edition, Lady Liberty is facing rightward and her hair is a bit more under control, rather than free-flowing. Arching overtop of the central inscription you will notice an inscription which reads “Liberty.” Below the central image there is another inscription, this one marking the 1794 year of minting. Finally, on both the obverse and reverse sides of the coin, the very outer edges are marked by raised dots, which give the coin a bit of added texture.

Grading the 1794 Liberty Cap Half Cent

For collectors, simply owning a 1794 Liberty Cap Half Cent is not enough. Because these coins are counterfeited so frequently, you will see that collectors only settle for those pieces that have been graded and certified as being authentic. Below, we will outline the different coin grades as well as what those grades mean for the appearance of the 1794 Liberty Cap.

Uncirculated: If a Liberty Cap is determined to be of Uncirculated grade, this means that the coin never made it out onto the open market. These pieces, from the day they were minted, will have been extremely well-preserved and will look today exactly like they did back in 1794.

Extremely Fine: If a 1794 Liberty Cap is graded as being Extremely Fine, this means that the coin will be in absolutely great condition save for a few very minor flaws. Whether it is a single scratch or a few chips, there will be some visible signs of damage, though not anything severe.

Fine: Fine is the grade given to coins that have been circulated quite heavily, but do not play host to an overwhelming amount of damage. These pieces will show plenty of scratching and smoothing on the surfaces, but none of it will be enough to compromise the surface imagery and lettering.

Good: Good is the grade given to coins that have been both heavily circulated and heavily damaged. These pieces will show plenty of signs of damage, including deep scratches and chips, from years and years of circulated.

Pricing the 1794 Liberty Cap Half Cent

In terms of determining the price you might be asked to pay for the 1794 Liberty Cap Half Cent, this is something that can be done almost solely by looking at the condition it is in. Because there are so few of these pieces on the market today, even the slightest changes in condition can mean the largest changes in price. Below, there is a chart aimed at giving you a better idea of what you might be asked to pay for a Half Cent, given its grade.