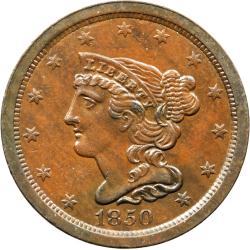 The 1850 Braided Hair Half Cent is an obscure, but desirable addition to any coin collection. The coin has an interesting history and was only produced for a few years. These two facts alone make collectors go to great lengths to get their hands on one. With them becoming older and older by the year, there has, quite literally, never been a better time for you to get your hands on one.

On the obverse side of the Half Cent, Lady Liberty is depicted facing leftward. The central image is incredibly detailed such that even the smallest curls in Lady Liberty’s hair can be easily deciphered. Within a band that is resting on Lady Liberty’s head you will notice an inscription reading “Liberty,” while the 1850 year of minting can be found underneath the central image. Around the outside of the imagery you will notice 13 stars, representative of the 13 original colonies of the United States.

On the coin’s obverse, the “Half Cent” face value is inscribed directly in the center. Surrounding this central face value inscription is an ornate wreath, replete with incredible detail and bound together with a bow. Around the outside of this is another inscription, this one reading “United States of America.” Finally, it must be mentioned that the edges of both coins feature reeds that add a bit of texture to the coin overall.

Grading the 1850 Braided Hair Half Cent

Whether you are just beginning to collect coins, or have been doing so for quite some time now, the fact of the matter is that counterfeits will also make your life more difficult. As a way of avoiding having to deal with counterfeited coins, collectors will only stand for those that have been graded and certified as being authentic. Below, we have touched on the different coin grades as well as what they mean for the appearance of the piece.

Uncirculated: An 1850 Braided Hair Half Cent that is determined to be of Uncirculated grade is one that never spent any time on the open market. From the day they were minted, these pieces will have been kept in safekeeping and will have been perfectly preserved.

Extremely Fine: Extremely Fine is the grade given to coins that are in absolutely flawless condition save for a few minor imperfections. Though the imperfections will hardly be noticeable by the naked eye, they are taken into account during the grading process.

Fine: Fine is the grade given to coins that have been circulated quite a bit, but are free from much major damage. You will notice things like consistent scratching and maybe even some smoothing as a result of the changing of hands over the years, but the coins will appear to be in decent condition.

Good: Good is the lowest grade a coin can receive, and is indicative of a piece that has been both heavily circulated and damaged. These pieces will play host to a lot of scratching and smoothing, sometimes so significant that some of the raised imagery and lettering will have been worn away entirely.

Pricing the 1850 Braided Hair Half Cent

In order to determine a price for the 1850 Braided Hair Half Cent, the scarcity of the coin is going to come into play. Because they were only produced in limited quantities, even more limited quantities exist today. In addition to that, you must also pay close attention to the coin’s condition. The more well-preserved a piece is, the more expensive it is more than likely going to be. Below, there is a chart aimed at giving you a better idea of what you might be asked to pay for a graded 1850 Braided Hair Half Cent.