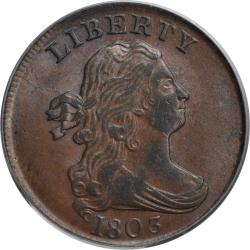 The 1803 Draped Bust Half Cent is one of those coins that collectors will pay a pretty penny to get their hands on. Having been produced so long ago, it should come as little surprise that there are not many on the market at the present moment in time. As time moves forward, the number of these coins for sale is only going to diminish, making now as good a time as ever to get your hands on one.

On the obverse side of the Half Cent, the central image is that of Lady Liberty, facing off to the right. The image of Lady Liberty is quite detailed such that even the curls in her hair are plainly visible. Above the central image is the inscription of the word “Liberty,” while the 1803 year of minting is inscribed on the bottom. On the very outer edges of both sides of the coin you will notice raised notches. These give the coin a bit more texture.

Grading the 1803 Draped Bust Half Cent

For collectors, the sheer popularity of this coin means that there are hundreds—if not thousands—of counterfeits out there. As a means of protecting themselves against these counterfeits, collectors make sure to purchase only those pieces that have been graded and certified as being authentic. Below, we have outline some of the different coin grades as well as what they mean.

Uncirculated: A coin determined to be of Uncirculated grade is one that never made it out onto the open market and never exchanged hands. These pieces will be in pristine condition and will look today almost exactly as they did in 1803, save for some fading of the color.

Extremely Fine: An Extremely Fine Draped Bust Half Cent will appear pristine, but under closer inspection you will notice a few minor flaws. Despite these few, sometimes hardly visible, flaws, the coins themselves will be in excellent condition and are highly desirable.

Fine: If a coin is determined to be of Fine grade, this means that the piece in question was definitely circulated for a period of time. From the consistent, light scratching and smoothing you see on the surfaces, it will be plain to see that these coins exchanged hands over the years. Despite this, they are still in decent shape.

Good: Good is the lowest grade a coin can receive and is indicative of a piece that has been both heavily circulated and heavily damaged. These pieces will play host to a lot of scratching, chipping, and plenty of other signs of extreme damage.

Pricing the 1803 Draped Bust Half Cent

In terms of assigning a price to the 1803 Draped Bust Half Cent, this is something that can most easily be done by way of the coin’s condition. Naturally, it goes without saying that the pieces that have been well-preserved are those that will carry the highest prices. Below, we have a chart aimed at giving you a better idea as to what you might be asked to pay for a graded 1803 Draped Bust Half Cent.