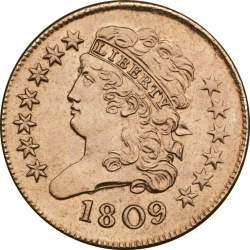 The 1809 Classic Head Half Cent is a piece any collector would want to get their hands on. The reason for this is due not only to the coin’s beautiful design, but also due to its historical significance. On top of all of this, the 1809 Classic Head is the first year a new design was utilized, which makes it especially valuable in the eyes of collectors.

On the coin’s obverse side, the center of the face is marked by the leftward-facing image of Lady Liberty. As opposed to previous years, Lady Liberty appears quite regal and stoic, with her hair held together by a metal band. Within that band there is an inscription which reads “Liberty.” Beneath the image of Lady Liberty you will notice the 1833 year of minting, while 13 stars are positioned to the left and right of the central image.

On the reverse side of the 1809 Classic Head Half Cent, the “Half Cent” face value is inscribed directly in the center. Surrounding this is a continuous, circular wreath that is depicted in stunning detail. Around the outside of the wreath there is another inscription, this one reading “United States of America.” Finally, it must be mentioned that the very outer edges of both sides of the coin feature raised notches, which give the coin a bit of added texture.

Grading the 1809 Classic Head Half Cent

For collectors, the simple fact of the matter is that when you have a coin as popular as the 1809 Classic Head, there are almost always going to be counterfeits. As a way of protecting themselves against counterfeit coins, collectors will only purchase those pieces that have been graded and certified as being authentic. Below, we have outlined the different coin grades as well as what they mean.

Uncirculated: If a coin is determined to be of Uncirculated grade, this means that the piece in question has been kept in safekeeping from the day it was minted. Having never been circulated and never having exchanged hands, these pieces will appear as pristine today as they did back in 1809.

Extremely Fine: Coins determined to be of Extremely Fine grade are those that appear to be in perfect condition. Despite their seemingly flawless condition, there will be a few minor imperfections noticed during the grading process. These are enough to downgrade the coin from Uncirculated to Extremely Fine.

Fine: If a coin is determined to be of Fine grade, this means that the piece in question was probably circulated a good bit, but taken out before too much damage could occur. You will notice that the surfaces of these coins feature a good amount of light scratching and wear, but other than that their imagery will have been well-preserved.

Good: Good is the grade given to coins that have been extremely heavily circulated and damaged. These pieces will have a lot of deep scratching, chipping, and other signs of damage associated with coins that were circulated for extended periods of time.

Pricing the 1809 Classic Head Half Cent

When it comes to determining the price you might be asked to pay for a Half Cent from 1809, the first thing you have to look at is the condition the coin is in. Naturally, the coins that have been well-preserved are going to fetch a higher asking price than those that have been heavily damaged. In addition to the condition the coin is in, it is also important to take note of how many are for sale. The fewer coins there are for sale, the higher the cost of an individual coin will be. Below, you will find a chart aimed at giving you a better idea of what a graded 1809 Half Cent might cost.