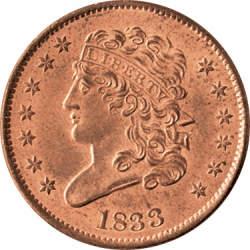 The 1833 Classic Head Half Cent is a coin that may be old, but is ever so relevant with collectors today. The fact of the matter is that this particular coin saw a fragmented minting history, with there sometimes being a few years in between releases. With that being said, the 1833 edition is incredibly popular and is a craved addition to any collection, big or small.

On the coin’s obverse, the center of the face is marked by the raised image of Lady Liberty, depicted in incredible detail. Inscribed within a band that is sitting on Lady Liberty’s head is the word “Liberty.” On both the left and right sides of the obverse side, there is a total of 13 stars on the surface, representative of the 13 original colonies of the United States. In addition, the 1833 year of minting is inscribed towards the bottom of the coin.

On the reverse side, the center of the face is marked by an inscription marking the “Half Cent” face value. Completely encircling the central face value inscription is a wreath, which is also depicted in great detail. Around the outside of the wreath is yet another inscription, this one reading “United States of America.” On top of all of this, it must be noted that the very outer edges of both sides of the coin are comprised of raised notches that give the coin some added texture.

Grading the 1833 Classic Head Half Cent

For collectors, the reality of things today is that most popular coins end up being reproduced as counterfeits. Understanding this, collectors are especially wary when it comes to coins as old as the 1833 Classic Head. As such, they will only settle for those pieces that have been graded and certified as being authentic. Below, we have outlined the different coin grades as well as what they might mean for the appearance of the 1833 Half Cent.

Uncirculated: An 1833 Classic Head Half Cent is one that never made it very far after having been minted. These coins, thanks to their years in safekeeping, will be in nearly perfect condition. Unfortunately, there have not been many of these coins on the market for some time now.

Extremely Fine: If a Classic Head Half Cent is determined to be of Extremely Fine grade, this means that the piece in question will have very minor imperfections. Though these imperfections are typically limited to nothing more than a scratch or two, they are still there.

Fine: A coin that is graded as being Fine will have been circulated, but will have been taken out of circulation before it could incur too much damage. These pieces will show signs of wearing and smoothing, but nothing so severe that the surface imagery nor lettering will have been worn away.

Good: Good is the grade given to the absolutely most worn coins out there. These pieces will show plenty of signs of damage, so much so that some of the surface imagery and lettering might have been completely worn away due to the exchanging of hands the coin went through over the years.

Pricing the 1833 Classic Head Half Cent

If you would like to determine the price you might be asked to pay for an 1833 Classic Head, the first thing you must take into consideration is the condition, or grade, of the coin. It makes sense that the better-preserved the coin is, the more expensive it is going to be. With all of that being said, there are only a limited number of these coins still around, so even some of the more worn pieces will have higher asking prices than you might expect. Below, you will find a chart aimed at giving you a better idea of what a graded 1833 Classic Head might cost.