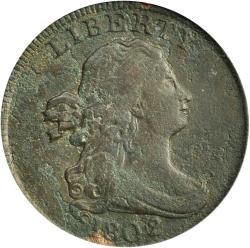 The 1802 Draped Bust Half Cent is popular amongst modern day collectors for a number of different reasons. For one, the 1802 edition of the Half Cent represents one of the first years a new design was utilized. Beyond that, the coin is of massive historical significance and is a must-have for any serious collector.

On the coin’s obverse side, the central imagery is that of Lady Liberty. The image of Lady Liberty is incredibly detailed and even the curls in her hair are discernable on pieces that have been well-preserved. The coin is referred to as the Draped Bust Half Cent because there is literally a draping covering the bust of the pictured woman. Above her head the word “Liberty” is inscribed, while the 1802 year of minting can be found towards the bottom of the obverse. It must be mentioned that on the very outer edges of both sides of the coin you will find raised notches which give the piece just a bit of added texture.

On the reverse side of the Draped Bust Half Cent, the center is marked by an inscription that reads the “Half Cent” face value. Surrounding this is a wreath that is tied together by a bow, and beneath the bow is an inscription reading “1/200”—or the coin’s value relative to a whole dollar. Around the outside of the wreath is one final inscription, this one reading “United States of America.”

Grading the 1802 Draped Bust Half Cent

For collectors, the fact that the 1802 Draped Bust Half Cent is so old is something that is a bit unnerving. The reason this is so is due to the fact that there are so many counterfeits on the market nowadays. As a means of protecting themselves against counterfeits, collectors will only purchase those coins that have been graded and certified as being authentic. Below, you will find an outline of the different coin grades as well as what those grades mean.

Uncirculated: If an 1802 Draped Bust Half Cent is determined to be of Uncirculated grade, this means that the coin never exchanged hands. Rather, from the day these pieces were minted they were put into safekeeping and kept there. As such, their condition can best be described as flawless.

Extremely Fine: If a coin is the recipient of an Extremely Fine grade, this means that the piece might have a few minor flaws but looks to be in good shape for the most part. By looking closely you will be able to notice a few minor scratches and/or chips, but nothing major.

Fine: Fine is the grade given to coins that have been heavily circulated, but not so heavily damaged. You will notice consistent light scratching across the faces, but none of the surface imagery will have been compromised.

Good: Good is the lowest grade a coin can receive and is indicative of a piece that has definitely seen its better days. You will notice things such as deep scratching and smoothing. In fact, some of the smoothing will be so severe that some of the surface imagery and lettering might be worn away.

Pricing the 1802 Draped Bust Half Cent

In terms of determining a price for the Draped Bust Half Cent, this is something that can first and foremost be done by viewing the condition of the coin and its associated grade. Naturally, it goes without saying that the more well-preserved a coin is, the higher the price is going to be. Below, we have a chart aimed at giving you a better idea of what to expect to pay for a graded 1802 Draped Bust Half Cent.