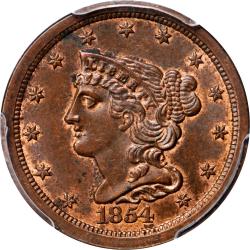 The 1854 Braided Hair Half Cent is a must-have in the eyes of most collectors simply because it is one of the last Braided Hairs to have ever been minted. What’s more, the 1854 edition marks the first release since 1851, giving it a bit more inherent value for collectors. With that being said, the number of these coins available for sale has been dwindling for some time now, and there are fewer and fewer for sale. As such, there has never been a better time than now for you to get your hands on one.

On the obverse side of the 1854 Braided Hair Half Cent, the center of the face is marked by the raised image of Lady Liberty, facing leftward. The image itself is incredibly detailed, so much so that even the word “Liberty”—which is inscribed within a band atop her head—can be easily identified. Around the outside of the central image you will notice 13 stars. Each one of these is representative of one of the 13 original colonies of the United States. Finally, beneath the central image you will find the 1854 year of minting.

On the coin’s reverse, the raised inscription marking the “Half Cent” face value stands out front and center. Surrounding the face value inscription is an ornate wreath, tied together with a bow. Around the outside of this is another inscription, this one reading “United States of America.” It must also be mentioned that the very outer edges of both sides of the coin are marked by notches that give the coin some added texture.

Grading the 1854 Braided Hair Half Cent

In terms of collecting the 1854 Braided Hair Half Cent, collectors know that there are plenty of counterfeits out there. In order to protect themselves from falling victim to one of these counterfeit pieces, collectors will only purchase those coins that have been certified as authentic and graded by a professional organization. Below, we have outlined the different coin grades as well as what they mean.

Uncirculated: If a coin is determined to be of Uncirculated grade, this means that the piece in question will have never made it out onto the open market to exchange hands. These pieces will be flawless and will appear today exactly as they did back in 1854.

Extremely Fine: A coin the is graded as being Extremely Fine was likely never circulated, or circulated for a very short period of time. To the naked eye, these pieces might appear to be flawless, but under closer inspection you will be able to uncover some minor imperfections.

Fine: If an 1854 Braided Hair Half Cent is determined to be of Fine grade, this means that the coin was probably circulated for a good bit of time. Thanks to the exchanging of hands over the years, these pieces will have some signs of wear, but will, for the most part, be in half decent condition.

Good: Good is the worst grade a coin can receive, and is indicative of a piece that has been both heavily circulated and damaged. At times, the damage on these coins is so severe that some of the raised aspects of the surfaces will have been compromised.

Pricing the 1854 Braided Hair Half Cent