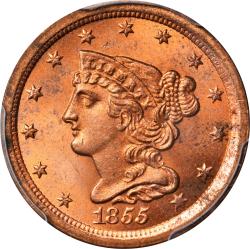 As far as the coin’s appearance is concerned, the obverse side is dominated in the center by the leftward facing image of Lady Liberty. The image of Lady Liberty is raised from the surface of the coin and appears slightly different than in previous editions of the Half Cent. Inscribed within a band that is resting atop Lady Liberty’s head is the word “Liberty.” Around the outside of the central image are 13 stars, each representative of one of the 13 original colonies of the United States. Finally, the 1855 year of minting is inscribed beneath the image of Lady Liberty.

The reverse side of the 1855 Braided Hair Half Cent is a good bit simpler than the obverse, and in the center there is the raised “Half Cent” face value inscribed. Around the outside of the face value inscription there is a wreath, tied together with a bow. On the outside of all of this, there is an inscription that reads “United States of America.” It must also be noted that the very outer edges of the coin, on both sides, feature raised notches that give the coin some added texture.

Grading the 1855 Braided Hair Half Cent

When it comes to the 1855 Braided Hair Half Cent, the simple fact of the matter is that collectors will not settle for just any coin. Because there are so many counterfeits on the market nowadays, collectors demand the coins that are both graded and certified as being authentic. Below, we will touch on the different coin grades as well as what these grades mean.

Uncirculated: If an 1855 Braided Hair Half Cent is determined to be of Uncirculated grade, this means that the coin was probably never out on the open market. Having never exchanged hands, these pieces will be in absolutely pristine condition. Unfortunately, there are few of these—if any—remaining.

Extremely Fine: An Extremely Fine Braided Hair Half Cent is a coin that is in near perfect condition, save for a few minor flaws. Though these flaws are typically minor and insignificant, they will be taken into consideration during the grading process.

Fine: Fine is the grade given to coins that have been circulated a good bit, but are not overly damaged. You will notice some light scratching across the surfaces of these pieces, but all of the raised imagery and other raised aspects of the coin will remain intact.

Good: A Good 1855 Braided Hair Half Cent is a coin that has been extremely damaged. These pieces were usually circulated longer than any other, and show visible signs of that circulation. From deep scratching to the complete smoothing away of some of the surface imagery, these pieces have seen their better days.

Pricing the 1855 Braided Hair Half Cent

In terms of the price you might be asked to pay for the 1855 Braided Hair Half Cent, that depends first and foremost on the condition the coin is in. In addition to that, however, you must take into consideration the number of coins available. Because these coins are so old, only a few exist, and that scarcity may drive up the price. Below, we have outlined the different prices you might be asked to pay for a graded 1855 Braided Hair Half Cent.