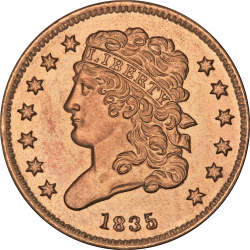 The 1835 Classic Head Half Cent is popular amongst collectors today for a wide variety of different reasons. For one, the 1835 editions was one of the last produced, and this makes the coins inherently valuable to collectors. The beautiful design is also a draw for collectors. There are only a limited number of these coins still on the market today, so it would behoove you to get your hands on one sooner than later.

On the coin’s obverse, the central part of the face is dominated by the leftward-facing image of Lady Liberty. The image is incredibly detailed and sees Lady Liberty sporting a band on her head, and within that band is an inscription reading “Liberty.” To both the left and right hand of the central imagery you will notice about 13 stars in total, representative of the 13 original colonies of the United States. Towards the bottom of the reverse you will notice an inscription marking the 1835 year of minting.

On the reverse side of the Half Cent, the central part of the face is dominated by the “Half Cent” face value. Around the outside of the central face value is an ornate wreath, depicted in incredible detail. Around the outside of the wreath there is one more inscription which reads “United States of America.” On the very outer edges of both sides of the coin there are raised notches, notches which give the coin some additional texture.

Grading the 1835 Classic Head Half Cent

Collectors, almost without exception, will only settle for specific types of Classic Head Half Cents. The reason for this is due to the fact that these coins are counterfeited quite frequently. As a result, collectors the world over will only settle for pieces that have been graded and certified as being authentic. Below, we have outlined the different coin grades and highlighted a bit about what, exactly, the grades mean.

Uncirculated: A coin that is determined to be of Uncirculated grade is one that never made it out onto the open market for circulation. Instead, from the day these coins were minted they were kept in a safe place, free from damage. Unfortunately, finding an Uncirculated 1835 Classic Head is no easy task.

Extremely Fine: A coin graded as being Extremely Fine is one that might not have ever been circulated, but is not entirely free of damage. Typically, the flaws you notice on this coin are very small, but they must be taken into account nonetheless.

Fine: Fine is the grade assigned to coins that were assuredly circulated for some period of time, but were taken out of circulation before too much damage could occur. On the obverse and reverse sides of these coins you will notice smoothing, scratching, and other signs of light wear. All of the surface imagery and lettering should still be decipherable.

Good: Good is the worst grade a coin can receive and is indicative of a piece that has been both heavily circulated and damaged. These pieces will have definitely seen their better days, but are still quite valuable in the eyes of collectors.

Pricing the 1835 Classic Head Half Cent

When it comes to assigning a price to the 1835 Classic Head, this is something that can be done most easily by assessing the grade and condition of the coin. More often than not, the more well-preserved a coin is, the more expensive it is going to be. Also, because these coins were produced so long ago, only a few are still available. The total number available for purchase will also play into the asking price. Below, you will find a chart aimed at giving you a better idea of what you might be asked to pay for an 1835 Classic Head Half Cent.