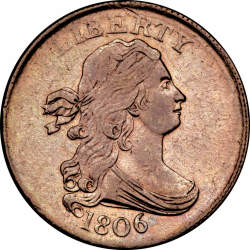 The 1806 Draped Bust Half Cent is an extremely attractive coin and is desired by collectors of all types. Because the coin was produced such a long time ago, it should come as no surprise that there are only a few remaining on the market today. Understanding this, there has, quite literally, never been a better time to get your hands on one.

On the obverse side of the coin, the central image is that of a rightward-facing Lady Liberty. Lady Liberty is depicted in stunning detail such that even some of the individual strands of hair can be discerned with the naked eye. Above the central image you will notice that there is an inscription which reads “Liberty.” Below the central image there is an inscription marking the 1806 year of minting. On the extreme outer edges of the coin you will notice raised notches. These give the coin a bit more texture and personality.

Grading the 1806 Draped Bust Half Cent

When it comes to collecting the 1806 Draped Bust Half Cent, things are not as simple as they might seem. The reason for this is due to the fact that counterfeit coins are found all the time. As a method of protecting themselves from counterfeits, collectors are only ever going to settle for the coins that have been graded and certified as being authentic. Below, we have outlined the different coin grades as well as what, exactly, they mean for the appearance of the coin.

Uncirculated: A coin determined to be of Uncirculated grade is one that never made it out onto the open market for one reason or another. As a result of this, these coins will have been perfectly preserved and will appear today exactly as they did when they were first minted.

Extremely Fine: If an 1806 Draped Bust Half Cent is graded as Extremely Fine, this means that the piece is in near perfect condition. While you may notice a few flaws, they will generally be small, insignificant, and hardly noticeable. As such, these coins are highly sought after by collectors.

Fine: Fine is the grade given to coins that have been circulated and damaged to some small degree. You will see light scratching and some smoothing of the surface imagery, but all of the images and lettering should be easily discernable with the naked eye.

Good: Good is the grade given to coins that have been heavily damaged. On occasion, the damage is so severe that the surface imagery and lettering that is raised from the surface will have been completely smoothed away due to the exchanging hands over the years.

Pricing the 1806 Draped Bust Half Cent

When it comes to assigning a price to the 1806 Draped Bust Half Cent, this is something that can be done by simply assessing the condition/grade. As you could have probably surmised, the more well-preserved the coin is the more value it inherently possesses. Below, you will find a chart aimed at giving you a better idea of what you might be asked to pay for a Draped Bust Half Cent, given its grade and condition.