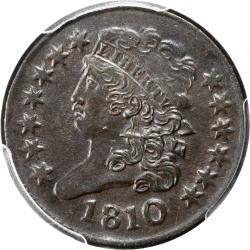 The 1810 Classic Head Half Cent is an attractive coin primarily due to the fact that it was one of the first of a new design. Previous years featured slightly different imagery, and collectors love getting their hands on some of the first editions of a new coin. With that being said, because the coin was produced in 1810, it goes without saying that there are not an overwhelming amount of them still around.

As far as the design of the coin is concerned, the obverse side features the image of Lady Liberty, depicted facing rightward. Lady Liberty is wearing a crown upon her head, and within that crown the word Liberty is inscribed. A total of 13 stars are featured to the central image’s left and right, with each star representative of one of the original 13 colonies of the United States. Finally, the 1810 year of minting is inscribed on the bottom part of the obverse.

The coin’s reverse, on the other hand, features the Half Cent face value directly in the center. As opposed to previous years, where only a partial wreath is depicted, the 1810 features a fully circular wreath around the central face value. Finally, on the outside of this, there is another inscription reading “United States of America.”

Grading the 1810 Classic Head Half Cent

When it comes to determining a grade for the 1810 Classic Head, this is something that can be done by looking at the condition of the coin. Luckily, the grading process sees professionals grade the coin and determine its official condition. Below, we have listed the different coin grades as well as what each one of them means.

Uncirculated: If an 1810 Classic Head is determined to be of Uncirculated grade, this means that the coin has been kept in safekeeping throughout the entirety of its existence. From the day it was minted, the coin will have never exchanged hands and will have remained in perfect condition.

Extremely Fine: A coin determined to be of Extremely Fine grade is one that is in absolutely flawless condition save for a few minor flaws. Though these flaws may be limited to nothing more than a single scratch or two, they are still noticed and taken into account.

Fine: If a coin is determined to be of Fine grade, this means that the piece was likely circulated for a good bit of time. Though you will see consistent scratching and even some smoothing on the surfaces, the coin will still be in great shape.

Good: Good is the grade given to coins that have been extremely heavily circulated and damaged. These pieces will show a lot of signs of wear, including some pretty intense scratching and chipping.

Pricing the 1810 Classic Head Half Cent

If you are attempting to determine the price you might be asked to pay for an 1810 Classic Head Half Cent, this is something that can first and foremost be determined by the condition the coin is. Naturally, if the coin has an excellent grade, it is going to fetch a higher asking price than coins that have been heavily damaged. Below, you will find a chart aimed at giving you a better idea of what you can expect to pay for a graded 1810 Half Cent.