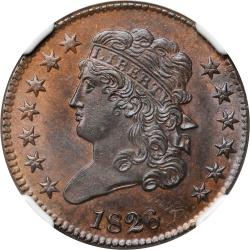 The 1826 Classic Head Half Cent is a coin that was popular when it was produced as well as today. These coins may only exist in limited quantities at the present moment in time, but collectors will still do whatever they have to in order to get their hands on one. As time moves on, the fact of the matter is that the quantity available for purchase will decrease, so it would behoove you to get your hands on one sooner rather than later.

On the obverse side of the Classic Head Half Cent, the image of Lady Liberty is depicted in the center. Lady Liberty is facing to the left and is wearing a band on her head. Within the band there is an inscription which reads “Liberty.” Finally, to the left and right sides of the central image you will notice a total of 13 stars, representative of the 13 original colonies of the United States. Finally, the 1826 year of minting will be inscribed on the bottom half of the coin.

On the coin’s reverse, the center of the coin is marked by the “Half Cent” face value. Surrounding the central face value inscription is an ornate wreath that features an incredible amount of detail. The wreath it tied together with a bow. Around the outside of the wreath you will notice another inscription, this one reading “United States of America.” On the very outer edges of both the obverse and reverse sides of the coin, you will notice there are notches that give the coin some added texture.

Grading the 1826 Classic Head Half Cent

For collectors, today’s modern market brings about a lot of counterfeit coins. If we are talking a coin as popular as the 1826 Classic Head Half Cent, there are many counterfeits out there. In order to protect themselves from counterfeits, collectors will only purchase those coins that have been graded and certified as being authentic. Below, we have outline the different coin grades as well as what they mean.

Uncirculated: If an 1826 Classic Head Half Cent is determined to be of Uncirculated grade, this simply means that the coin in question has never exchanged hands on the open market. Thanks to this, these pieces will look today exactly like they did when they were first minted.

Extremely Fine: If a coin is on the receiving end of an Extremely Fine grade, this means that the coin is in perfect condition save for a few minor imperfections. You may notice a single scratch or two on the surfaces, but apart from this these coins will be in great condition.

Fine: Fine is the grade given to coins that have been circulated and damaged to some extent. Thanks to the changing of hands over the years, these pieces will show a lot of wear and tear, such as scratching and smoothing. All in all, they will still be in pretty decent shape.

Good: Good is the grade given to the absolutely most poorly preserved coins. These pieces will have been extremely heavily circulated and damaged, sometimes so severely that the surface imagery and lettering will have been worn away.

Pricing the 1826 Classic Head Half Cent