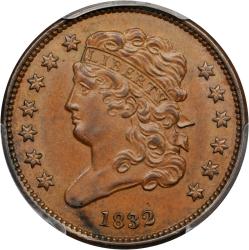 The 1832 Classic Head Half Cent is a coin collectors will do anything to add to their collection. The Classic Head is a particularly interesting coin because the years during which it was produced were fragmented, to say the least. The 1832 edition was the first edition released in 3 years, and as such it is quite popular.

On the obverse side of the 1832 Classic Head Half Cent, the center of the face is marked by the leftward-facing image of Lady Liberty. The image of Lady Liberty is quite detailed, and inscribed upon a band that is resting on her head is the word “Liberty.” Off to both the left and right of the central image you will notice a total of 13 stars, representative of the 13 original colonies of the United States. Towards the bottom of the face, the 1832 year of minting will be inscribed.

On the coin’s reverse, the design is a bit more simplistic. In the center, the “Half Cent” face value is inscribed. Around the central face value there is an ornate wreath, tied together with a bow. Around the outside of this, there is another inscription which reads “United States of America.” Finally, it must be noted that the very outer edges of both sides of the coin are marked by raised notches, which give the coin a bit of added texture.

Grading the 1832 Classic Head Half Cent

The very real situation that most collectors have to deal with nowadays is the incidence of counterfeit coins. Especially when it comes to coins as popular as the 1832 Classic Head Half Cent, there is a large number of coins counterfeited year in and year out. A way collectors protect themselves from counterfeits is by only purchasing the coins that have been graded and certified as being authentic.

Uncirculated: If a Classic Head Half Cent is determined to be of Uncirculated grade, this means that is never really saw the light of day. Having never been circulated on the open market, these pieces will appear today just as they did in 1832. It suffices to say that these coins are the most sought after.

Extremely Fine: If an 1832 Classic Head is determined to be of Extremely Fine grade, it will be ingreat condition save for a few minor imperfections. Though the imperfections may be as minor as a small scratch or two, they will be taken into consideration during the grading process.

Fine: A coin assigned the Fine grade is one that was circulated for a good bit of time, but not so much that the piece incurred a lot of damage. Though you will notice some light scratching and maybe even some wear, the surface imagery and lettering will still be decipherable.

Good: Good is the worst grade a coin can receive and is indicative of a piece that was both heavily circulated and damaged. The damage will be so severe that some of the coin’s raised aspects will have been completely worn away.

Pricing the 1832 Classic Head Half Cent

As far as a price for the 1832 Classic Head Half Cent is concerned, this is something that will first and foremost depend upon the condition the coin is in. It only makes sense that those coins that have been well-preserved over the years are also the ones sporting the highest asking prices. In addition to this, the total number of coins that are for sale also plays a role in the asking price. If there are only a select few coins left, their asking prices will more than likely be higher than editions that have an abundance on the market. Below, you will find a chart aimed at giving you a better idea of what you might be asked to pay for a graded 1832 Classic Head Hal Cent.