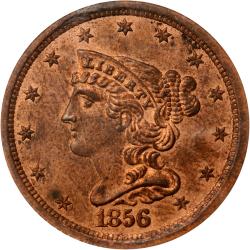 The 1856 Braided Hair Half Cent is one of those coins that collectors simply will do anything to get their hands on. Not only does the design of the coin differ from many of the previous editions of the Half Cent, the coin itself was only produced for a short period of time. This scarcity makes the coins difficult to find, and as such only more desirable in the eyes of collectors.

On the obverse side of the coin, the central feature is that of the inscription of Lady Liberty, depicted facing leftward. Lady Liberty’s image is raised from the face of the coin, and within a band that is resting on her head you will see the word “Liberty” inscribed. Around the outside of the central image there are 13 stars, representative of the 13 colonies of the United States. Beneath the central image you will find inscribed the 1856 year of minting.

The reverse side of the Braided Hair Half Cent is markedly simpler than the obverse. In the center is inscribed the “Half Cent” face value. Around the outside of this face value inscription you will found a wreath, a wreath that is completely encircling the inscription. On the outside of the wreath there is another inscription, this one reading “United States of America.” Finally, it must be mentioned that the outside of both sides of the coin feature notches that give the coin some added texture.

Grading the 1856 Braided Hair Half Cent

For collectors, possessing the 1856 Braided Hair Half Cent is something everyone desires, however there are certain precautions that must be taken. Because there are so many counterfeits on the market today, collectors will only settle for those coins that have been graded and certified as being authentic. Below, we have outlined the different coin grades as well as what those grades mean.

Uncirculated: If an 1856 Braided Hair Half Cent is determined to be of Uncirculated grade, this means that the coin was kept in safekeeping from the day it was minted. Because of this, these pieces will appear to be in absolutely pristine condition. Unfortunately, there are very few Uncirculated 1856 Half Cents out there.

Fine: Fine is the grade given to coins that have been circulated, but have not been overly damaged as a result. You will notice some light scratching and other signs of wear on the faces of the coin, but the raised imagery and lettering on the surfaces of the coin will have been presumed.

Good: Good is the lowest grade a coin can receive and is indicative of a piece that has been both heavily circulated and damaged. These pieces will show deep scratching, smoothing, and other major signs of damage. These pieces are still sought after by collectors.

Pricing the 1856 Braided Hair Half Cent

In terms of assigning a price to the 1856 Braided Hair Half Cent, this is something that depends upon a few different factors. First and foremost, the condition of the coin means absolutely everything. If the coin has been well-preserved, it will carry a higher price tag than one that has not been. In addition to this, the overall scarcity of the coin will also come into play as fewer and fewer remain on the open market. Below, you will find a chart outlining the price you might be asked to pay for a graded 1856 Braided Hair Half Cent.