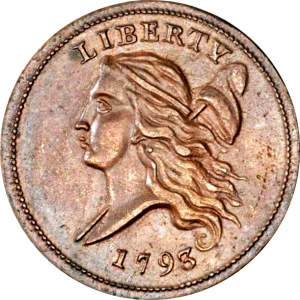 The US Mint was founded shortly after the founding of the country itself. One of the first coins ever produced by this newly-founded mint is known as the Liberty Cap Half Cent. Having first been produced in 1793, these coins are perhaps some of the absolutely most sought after coins in all of the world. With that being said, these coins are so old that there are only a few remaining, making now as good a time as ever to get your hands on one.

On the obverse side of the Liberty Cap Half Cent, you will notice the center of the face is marked by the leftward-facing bust of Lady Liberty. Lady Liberty is depicted in stunning detail, showing her bow-tied hair being blown in the wind. Arching overtop of the central image is an inscription which reads “Liberty.” Beneath the central image, the 1793 year of minting is inscribed. Around the outer edges of both side of the coin, there are raised dots which give the coin some added texture.

The coin’s reverse can best be described as ornate, as the detail and imagery is second to none. In the very center, the coin’s “Half Cent” face value is marked. Partially surrounding this inscription is wreath that is tied together with a bow. Beneath the bow you will see an inscription which reads “1/200,” or the coin’s face value. Finally, arching overtop of the reverse are the words “United States of America.”

Grading the 1793 Liberty Cap Half Cent

For collectors, the prospect of owning a 1793 Liberty Cap is an intriguing one, but one that also brings with it a good bit of caution. The reason for this is due to the fact that there is an increasing number of counterfeits making their way to the market. As a means of protecting themselves against counterfeits, collectors will only want to purchase the coins that have been graded and certified as being authentic. Below, we will outline the different coin grades.

Uncirculated: If you have yourself an Uncirculated 1793 Liberty Cap (and very few people do), you are in possession of a coin that never made it out onto the open market. Because of this, the coin will look today like it did when it was first minted more than 200 years ago.

Extremely Fine: A coin determined to be of Extremely Fine grade is one that will be pristine save for a few minor flaws. You will notice imperfections such as a single scratch or chip, but nothing so large that it will detract from the appearance of the coin.

Fine: If a coin is determined to be of Fine grade, this means that it was likely circulated for a pretty extended period of time. These pieces will have their fair share of scratching and chipping, but all of the surface imagery and lettering should be easily discernable with the naked eye.

Good: Good is the grade given to coins that have been both very heavily circulated and very heavily damaged. These pieces will have deep scratching and smoothing, so much so that some of the surface imagery and lettering will have been completely worn away.

Pricing the 1793 Liberty Cap Half Cent

When it comes to the 1793 Liberty Cap Half Cent, you are almost always going to be paying a fairly high price for the coin. The simple fact of the matter is that the coin is so old, and that there are so few remaining, that collectors will be content to pay top dollar. Below, you will find a chart aimed at giving you a better idea of what you might be asked to pay for a graded 1793 Liberty Cap Half Cent.