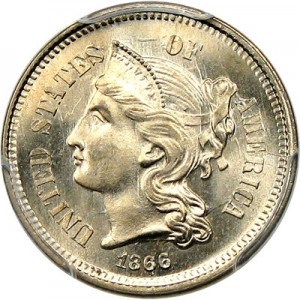 The Three Cent Nickel was produced by the U.S. Mint from 1865 to 1889. During the years 1865 to 1873, the mint also produced a three cent silver piece as well. Because the series was only produced by the mint for a 25 year period, several of its editions may be considered rare and collectable. In fact, rare dated coins may trade for over three times the premium of common date coins.

The Three Cent Nickel was never popular as a circulation coin. Because of this, many of these coins may still be found in nearly pristine or uncirculated condition thus increasing their potential value.

By getting your coin graded by a professional numismatist, you can get a very good idea on the potential value of your Three Cent Nickel. The coin grading process is extremely thorough and will account for any flaws or imperfections in your coin while assigning the coin a grade.

There are some simple methods you can utilize to try to gauge the potential grade of your coin and thus its market value. One simple trick is to look at the rim of the coin. A coin in good condition will likely have a rim that feels worn down and it may even have parts of the rim completely washed away. A coin in excellent condition, however, will have a rim that remains robust and has good texture. You can also look at other details such as Lady Liberty’s hair. A coin in great physical condition will have hair that can still be felt easily and has kept the majority of its detail. A coin in good condition, however, may have hair that is noticeably worn down or has scratches over the surface.

To be assigned a grade of extremely fine, the coin must have almost zero imperfections. This means that all details such as text and imagery must be in almost pristine condition and that the coin is free from any surface damage or blemishes.

If you have a Three Cent Nickel that is from a popular mint year or a coin that appears to be in excellent condition, you may want to consider sending it in to a professional grading company such as PCGS or NGC. These professional numismatists can thoroughly examine your coin for any imperfections while also verifying its metal content and authenticity. The small fee you pay for having a coin graded may be a worthwhile investment in order to make sure you know the fair market value of your coin. Coins that have been graded typically sell for higher premiums than non-graded coins, so your investment in the grading process could potentially pay for itself many times over.

The Three Cent Nickel was only minted for a quarter century. While a dozen of these mint years are relatively easy to find, 13 of them are not as easy and thus may be more desirable to dealers and collectors. Values for the common dates may range from $11 in good condition to $75 or more in uncirculated condition. If you have a nickel from a collectable mint date, your coin may potentially be worth a minimum of $30. Depending on condition, these collectable mint editions can easily trade in the hundreds of dollars.

The value of your Three Cent Nickel may change from year to year. While many coins see a steady increase in value over the years as they age, this increase may be very small. Because these coins were not as popular as other coin types, any appreciation seen in their values may be more gradual. That being said, however, coins from desired mint years may potentially see significant increases in value with the passage of time, especially if they are preserved in extremely fine or uncirculated condition.