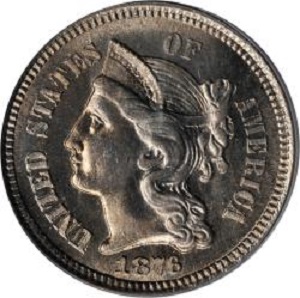 The 1876 Three-Cent Nickel, along with most other versions of the coin, is an incredibly popular piece in the eyes of collectors. This coin was not only produced for a very short period of time, it is also a coin that features a denomination we have never seen since the coin went out of production. With the quantity of these coins decreasing all the time, there has never been a better time than now to get your hands on these coins.

On the obverse of the Three-Cent Nickel, the main feature is the leftward facing image of Lady Liberty. Lady Liberty is depicted in stunning detail, especially when you think about how crude the technology of the time was. Surrounding the image of Lady Liberty is a raised inscription which reads “United States of America.” Beneath the inscription and imagery is the indication marking the 1876 year of minting. Finally, it must be mentioned that on both the obverse and reverse sides of the coin, the outer edges are reeded.

On the reverse side, there isn’t much. The design of the reverse is simplistic in that it features in the center the 3-cent face value. The face value indication is marked by Roman numerals. Finally, there is a wreath that partially surrounds the central face value.

No matter what type of collector you are, chances are you want to get a coin that is in the best possible condition. Due to Three-Cent Nickels being so old, their condition is never guaranteed. For this reason, any Three-Cent Nickels worth purchasing are graded. Below, you will find an outline of the different coin grades as well as what that grade means for the appearance of the 1876 Nickel.

Uncirculated: If a Three-Cent Nickel is graded as being Uncirculated, this means that it has, quite literally, never spent any time on the open market. As a result of this, these pieces will look today just as they did the day they were minted. The only imperfection you might notice is that the coloration of the coin might have faded due to its age.

Extremely Fine: Extremely Fine is indicative of an 1876 Three-Cent Nickel that was probably never circulated, however there will be some small signs of damage. Though the damage will often be minuscule, it is still there and is still taken into consideration.

Fine: Fine Three-Cent Nickels are the ones that were circulated for an extended period of time, but not so heavily damaged during that time. Apart from some consistent, light scratching, and maybe a few chips, these coins will have survived the years in excellent shape.

Good: Good is the worst grade a Three-Cent Nickel can receive, and indicates one that has been heavily circulated and damaged. The damage on these coins can be so severe that some of the raised imagery and lettering of the coin might have completely gone away.

In order to determine the nominal value of an 1876 Three-Cent Nickel, you really have to look at the coin’s condition. When it comes to coins this old, even the smallest differences in condition can mean massive differences in price. Below, you will find a chart aimed at giving you a better idea as to what you might be asked to pay for an 1876 Three-Cent Nickel given its grade/condition.