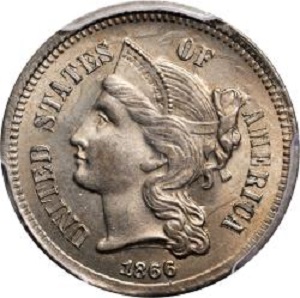 The 1866 Three-Cent Nickel is highly sought after by collectors and is a pivotal part of any collection. The coin itself is well over 150 years old and being that they are no longer being produced, there has never been a better time than now to get your hands on one.

The reverse side of the 1866 Three-Cent Nickel features a raised inscription marking the 3-cent face value of the coin. The face-value is marked by a large, raised Roman numeral 3. The central face-value marking is surrounded by an ornate wreath.

When it comes to 1866 Three-Cent nickels, the key for collectors is to acquire the most well-preserved pieces. Being that these coins are so old their condition is never a certainty. As such, collectors only desire to own graded coins. Below, we will outline the different coin grades as well as what the grade means for the appearance of the Three-Cent Nickel.

Uncirculated: An 1866 Three-Cent Nickel that has been graded Uncriculated is one that has been perfectly preserved from the day of minting to today. These coins will be absolutely flawless and, apart from some discoloration due to age, will be in pristine condition.

Extremely Fine: An 1866 Three-Cent Nickel that has been graded as being Extremely Fine is one that will be mostly pristine, but will feature a minor flaw or two. Whether it is a small chip or scratch, there will be some sort of imperfection on one or both of the nickel’s faces.

Fine: Fine is the grade given to Three-Cent Nickels that were circulated for some time, but taken out of circulation before they could be too heavily damaged. You will notice some light scratching and smoothing of the coin’s raised aspects, but all of the features will still be identifiable with the naked eye.

Good: Good is the grade given to 1866 Three-Cent Nickels that have been very heavily worn. As you might have guessed, this describes a majority of the coins available today. Many of the raised features of the coin, such as the lettering and imagery, will have been worn down due to the constant exchanging of hands throughout the years.

When it comes to determining a price for the 1866 Three-Cent Nickel, it is safe to say that the condition it is in means everything. Because these coins are so old and no others are being found, the price you will pay will directly coincide with its condition. Below is a chart aimed at giving you a better idea as to what the 1866 Three-Cent Nickel is valued at given its grade.