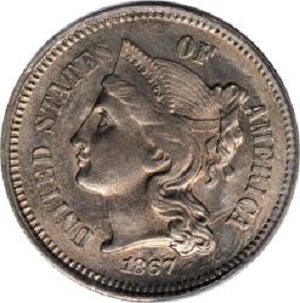 The 1867 Three-Cent Nickel is an especially popular coin for collectors due to its age and historical significance. Being that these coins have long since had their production ceased, the finite quantity makes now as good a time as ever to get your hands on one.

The reverse side of the 1867 Three-Cent Nickel boasts a raised inscription in the center, which marks the 3-cent face value. The face-value is actually represented by a large, raised Roman numeral 3. Surrounding the face value is an ornate wreath. All in all the design of this coin is quite simple.

Because these coins are so old and susceptible to forgery, you will scarcely find a collector seeking one out that isn’t graded. In the following we will outline the different coin grades as well as what they mean for the appearance of the 1867 Three-Cent Nickel.

Uncirculated: A coin determined to be of Uncirculated grade is one that never spent any time exchanging hands on the open market. Thanks to this, its appearance, including all of the raised lettering and imagery, will be perfectly preserved. The only flaw is that there will be some discoloration due to the coin’s age.

Extremely Fine: An Extremely Fine 1867 Three-Cent Nickel is one that was probably never circulated, but is also not free of damage. Though the wear and tear may be small and maybe even unable to be seen with the naked eye, it is still taken into consideration during the grading process.

Fine: If a coin is determined to be of Fine grade, this means that it was circulated for an extended period of time, but not heavily damaged as a result. You will assuredly notice some scratching and smoothing on both sides of the coin due to the exchanging of hands over the years. All things considered, these pieces will still be in decent shape.

Good: Good is the grade assigned to the Three-Cent Nickels that have been extremely heavily worn. These nickels were circulated for many years and show plenty of signs of that circulation. In fact, some of the raised features might have been completely worn away due to the exchanging of hands over the years.

In order to determine a price for the 1867 Three-Cent Nickel you must look primarily at the condition the coin is in. Because these nickels are so old, even the most marginal aesthetic differences can mean major differences as far as value is concerned. Below exists a chart aimed at giving you a better idea as to what an 1867 Three-Cent Nickel will be worth given its grade.