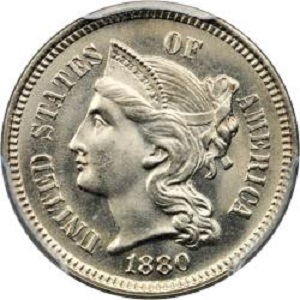 The 1880 Three-Cent Nickel is an extremely popular coin for collectors, but with the quantity of these coins increasing it would behoove you to get your hands on one quickly. Not only do these coins feature a unique face value that has since been put out of production, they are well over 100 years old and a piece of history in their own right. All in all, there has never been a better time to get your hands on these pieces.

The obverse side of the 1880 Three-Cent Nickel boasts the central, leftward facing image of Lady Liberty. Her image is a bit different from what you will see on the Statue of Liberty, but she is still as regal and stoic as ever. Surrounding the image of Lady Liberty is a raised inscription which reads United States of America. Beneath the central image is a raised inscription which marks the 1880 year of minting. The outer edges of both the obverse and reverse are reeded.

On the coin’s reverse, you will notice that the center is dominated by the raised, 3-cent face value. The face value of this coin is unique because it is inscribed in Roman numerals rather than traditional numbers. Surrounding the face value is a classy, seasonal wreath.

When it comes to collectors, not just any 1880 Three-Cent Nickel will do. Instead, collectors will only settle for those pieces that have been well-preserved throughout the years. Beyond that, collectors also want to have coins whose authenticity have been guaranteed. As such, only graded coins will be desired by collectors. Below, we will outline the different coin grades as well as what they mean for the appearance of the Three-Cent Nickel.

Uncirculated: A Three-Cent Nickel that has been graded as being Uncirculated is one that has never made it out into circulation. These pieces have been kept in a safe place throughout the whole of their existence, and have incurred none of the damage typically associated with coins so old. All in all, these are the most well-preserved coins.

Extremely Fine: An Extremely Fine 1880 Three-Cent Nickel is one that probably never spent any time in circulation, but might have a few signs of damage. Whether it is a single scratch or chip, there will be some sort of damage. All things considered, these coins are still very well-preserved.

Fine: Coins that are graded as being Fine are those that were probably somewhat heavily circulated, but not so heavily damaged. These coins will feature light, consistent scratching, as well as some smoothing due to the changing of hands over the years. Still, all of the raised imagery will be intact and visible.

Good: Good is the worst grade a coin can receive, and is indicative of coins that feature a lot of wear and tear. These pieces have exchanged hands so many times that their raised imagery and lettering might be completely smoothed away. Still, collectors will add these coins to their collections because of the overall rarity.

When it comes to determining a price for the 1880 Three-Cent Nickel, you really do not need to look much further than the coin’s condition. These coins are old, so most of them are going to be damaged to some degree, but those that have been even marginally well-preserved will fetch a high price. Below is a chart aimed at giving you a better idea as to what you might pay for an 1880 Three-Cent Nickel given its grade.