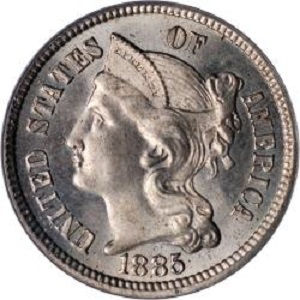 Collectors love unique coins, and they really don’t get more unique than the 1885 Three-Cent Nickel. This coin is unique not because of its design, but due to the fact that it has not been produced for more than a century and features a face value most people never even knew existed. Being that the available quantity of 1885 Three-Cent Nickels is constantly diminishing, there has never been a better time than now to get your hands on one.

On the coin’s obverse, the central part of the face is dominated by the raised image of Lady Liberty. When you take into consideration the crude technology of the time, the amount of detail on this image is truly remarkable. Surrounding the central image is a raised inscription which reads “United States of America.” Beneath the central image is a raised inscription marking the 1885 year of minting. Something worth noting is the fact that, on both the obverse and reverse sides, the outer edges of the coin are reeded.

Uncirculated: If an 1885 Three-Cent Nickel is determined as being Uncirculated, this means that the coin never spent any time in circulation. Because of this, the condition of the coin today is exactly as it was way back in 1885. The color of the coin might have faded a bit due to age, but that is the only drawback you will notice.

Extremely Fine: A coin determined to be of Extremely Fine grade is one that probably never spent any time exchanging hands on the open market, but does feature a flaw or two. Though these flaws may not be able to be seen with the naked eye, they do exist and will be noticed during the grading process.

Fine: Fine is the grade given to coins that have been heavily circulated, but not so heavily damaged. You will notice plenty of light scratching and smoothing on the coin’s surfaces, but all of the raised imagery will still be preserved.

Good: Good is the grade given to coins that have been extremely heavily circulated and damaged. Thanks to the pieces having exchanged hands thousands and thousands of times throughout the years, you will notice some significant smoothing. Despite this, these coins are still sought after by collectors.