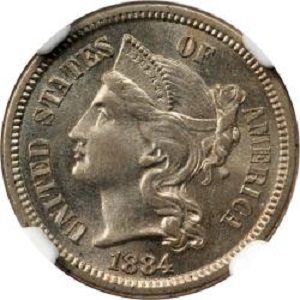 The 1884 Three-Cent Nickel is easily one of the most sought after coins on the market today, and the reasons for this number in the hundreds. Topping the list of reasons why this coin is so popular is both the unique face value as well as the fact that it has not been produced since the late 19th century. Having been produced so long ago, the quantity of Three-Cent Nickels is always decreasing. This is why there has never been a better time than now for you to get your hands on one.

On the coin’s obverse, Lady Liberty’s image is raised from the surface of the coin and located in the center. Lady Liberty appears as regal as ever and is depicted in stunning detail when you consider just how long ago these coins were made. Surrounding the central image is a raised inscription which reads “United States of America.” Beneath the central image is a raised inscription marking the 1884 year of minting. It is worth mentioning that on both sides of the coin, the outer edges are reeded.

As for the coin’s reverse, the design is very simplistic. In the center, the coin’s 3-cent face value is indicated by Roman numerals. Partially surrounding the central face value is an ornate wreath.

As far as collectors are concerned, it goes without saying that only those coins that have been well-preserved are going to catch the eye of collectors. Because of this, you will notice that collectors are only going to settle for those Three-Cent Nickels that have been graded and certified as being authentic. Below we will walk you through the different coin grades as well as what they mean for the appearance of the 1884 Three-Cent Nickel.

Uncirculated: A coin that is determined to be of Uncirculated grade is one that never spent any time in circulation. Because these coins never spent any time on the open market exchanging hands, they will feature absolutely no signs of damage. The coin’s color might have been worn due to its age, but its appearance will be pristine.

Extremely Fine: A Three-Cent Nickel that is determined to be of Extremely Fine grade is one that was probably never circulated, however does feature some signs of damage. Usually, this damage is small and barely noticeable with the naked eye, but it does exist and is taken into consideration during the grading process.

Fine: Fine is the grade given to 1884 Three-Cent Nickels that have been circulated, but not so heavily damaged. These pieces will show plenty of signs of wear and tear, including light scratching and some smoothing. Still, all of the raised aspects of the coin will be well-preserved.

Good: A coin determined to be of Good grade are those that have been extremely heavily circulated and damaged. In many cases, the damage on these coins will be so significant that some, or many, of the raised aspects of the coin will have been smoothed down completely.