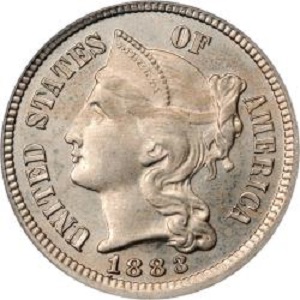 Three-Cent Nickels are among the absolute most unique coins ever minted by the US Mint, there is no denying this. Not only has a coin like this never been minted since, the number of these available is decreasing all the time. What’s more, the coin features a design and face value that is extremely unique. All things considered, there are very few coins who can lay claim to the level of popularity that the Three-Cent Nickel has reached.

The obverse side of the 1883 Three-Cent Nickel is dominated in the center by the image of Lady Liberty. Though the regal woman does not exactly resemble the Statue of Liberty, her features are just as strong and regal as you would expect them to be. Surrounding the raised, central image is a raised inscription which reads “United States of America.” Beneath the central image is an inscription marking the 1883 year of minting. It is worth mentioning that both the obverse and reverse sides of the 1883 Three-Cent Nickel feature reeded edges.

On the reverse, you will notice that the center features a raised face value. The 3-cent face value is inscribed as a Roman numeral. Surrounding the face value to some extent is the image of a wreath.

For collectors, having just any 1883 Three-Cent Nickel is not enough. Because these coins are so old and so susceptible to being counterfeited, collectors will only desire those coins that have been guaranteed as being authentic. As such, collectors will only want those coins that have been graded by a professional grading service. Below, we will list the different coin grades as well as what those grades mean for the appearance of the 1883 Three-Cent Nickel.

Uncirculated: If an 1883 Three-Cent Nickel is graded as being Uncirculated, this means that the coin was never exchanged on the open market. Being that these coins have been kept in safekeeping for the entirety of their existence, their condition will have been absolutely perfectly preserved.

Extremely Fine: A coin that is graded as being Extremely Fine is one that was probably never circulated, but does feature some minor signs of damage. Whether it comes in the form of a scratch or chip, there will be very slight flaws.

Fine: A Fine 1883 Three-Cent Nickel is one that was probably circulated for some period of time. These coins will show wear and tear consistent with circulated coins. From light scratching, to smoothing, and other signs of damage, they will all be present. Beyond that, these coins will appear to be in decent shape considering their age.

Good: A coin that is determined to be of Good grade is one that will have been extremely worn due to many years in circulation. The signs of wear and tear on these coins are severe, and can be so dramatic that some of the raised aspects of the coin will have been nearly entirely worn away.

In order to determine the nominal value of an 1883 Three-Cent Nickel, you really don’t have to look too much further than the condition. Because these coins are so old, no one is really anticipating that they will be able to find one that has been perfectly preserved. With that said, as the condition of a coin improves by even the most marginal amounts, its price can jump up dramatically. Below, there exists a chart that will help you price the 1883 Three-Cent Nickel given its grade.