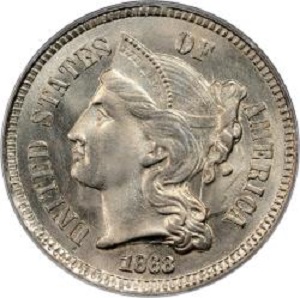 The Three-Cent Nickel was produced across a timeframe of nearly 20 years, but the 1868 variety is especially sought after by collectors due to a new design of sorts. Today, the coin’s historical significance, along with its age, make it highly valuable in the eyes of collectors.

On the obverse side of the 1868 Three-Cent Nickel the central part of the face is dominated by the image of Lady Liberty. The image is incredibly detailed and shows the Lady facing leftward. Surrounding the image of Lady Liberty is a raised inscription which reads “United States of America.” Also, the 1868 year of minting is featured on the coin as well. The outer edges of both sides of the coin are reeded.

The reverse side of the coin features a raised inscription in the center which shows the Roman numeral 3. The central face value is surrounded by a very ornate wreath, giving the coin a very regal feel.

Uncirculated: A Three-Cent Nickel that is determined to be of Uncirculated grade is one that never spent any time on the open market. Due to these coins having been kept in a safe place throughout their existence, there are no flaws present on the faces.

Extremely Fine: If an 1868 Three-Cent Nickel is graded as being Extremely Fine, this means that while it was probably never circulated, there are a few flaws. Whether it be a few scratches or chips, the flaws will almost always be small and hardly noticeable with the naked eye.

Fine: A coin that is graded as being Fine is one that was circulated for a period of time, but not too heavily damaged. Thanks to the exchanging of hands over the years, you will notice that things like the central imagery and reeded edges might have been slightly worn away. Still, these pieces will be in decent shape overall.

Good: Good is the grade given to 1868 Three-Cent Nickels that have been extremely heavily worn due to years of exchanging hands. The imagery and lettering on these coins will have been heavily worn, sometimes so significantly that the surface of the coin will be totally smooth.