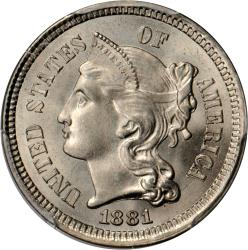 The 1881 Three-Cent Nickel is a coin that is sought after by collectors nowadays for a number of reasons. Among these reasons are the overall rarity of the coins as well as the unique face value. If you are unfamiliar with US coins, you should know that 3-cent coins are no longer produced. Because the available quantity of the 1881 Three-Cent Nickel is forever moving downward, now is as good a time as ever to get your hands on one of these coins.

On the obverse side of the Three-Cent Nickel, you will see the leftward facing image of Lady Liberty dominating the center aspect. Lady Liberty’s image is raised from the face of the coin and textured. Surrounding the central image is a raised inscription which reads “United States of America.” Beneath the image and inscription is an indication for the 1881 year of minting. Finally, it must be mentioned that the outer edges of both the obverse and reverse sides are reeded.

The reverse side of the 1881 Three-Cent Nickel features in the center the coin’s 3-cent face value. What makes this particular face value indication unique is the fact that it is inscribed with Roman numerals. Rounding out the reverse, there is an ornate wreath partially surrounding the central face value.

Uncirculated: A Three-Cent Nickel that is determined to be of Uncirculated grade is one that, quite literally, never spent any time in circulation. From the very first day that these coins were minted, they were kept in a safe place where they avoided all signs of wear and tear.

Fine: Fine is the grade given to coins that have been heavily circulated, but not so heavily damaged. Though there will be plenty of signs of light scratching and smoothing, none of the raised lettering and imagery will have been compromised.

Good: Good is the worst grade a coin can receive, and is indicative of a Three-Cent Nickel that has been extremely heavily circulated and worn. These pieces will show a lot of scratching and chipping, so much so that some of the raised imagery, such as Lady Liberty, will have been significantly smoothed down due to the changing of hands over the years.

When it comes to determining the value of a Three-Cent Nickel, one of the biggest determinants is the condition it is in, or grade it has received. Because very few people anticipate finding a very well-preserved 1881 Three-Cent Nickel, those few that have been decently preserved tend to fetch a high asking price. Below is a chart aimed at giving you a better idea of what these coins might cost given their grade.