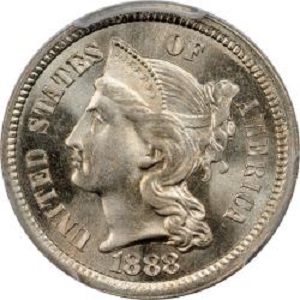 The 1888 Three-Cent Nickel is especially sought after by collectors due to its age as well as its intriguing face value. If you are unfamiliar with US coins, there are no longer any 3-cent coins being minted, and that gives this particular coin a bit of extra intrigue. Because these coins are no longer being minted, there has never been a better time than now to get your hands on one.

On the coin’s obverse, the central aspect features the raised image of Lady Liberty. Though she looks a bit different from the Statue of Liberty, Lady Liberty appears on the Three-Cent Nickel as regal as ever. Surrounding the central image is a raised inscription which reads United States of America. Finally, the bottom part of the obverse features a raised inscription marking the 1888 year of minting. On both the obverse and reverse sides of the Three-Cent Nickel, the outer edges are reeded.

The reverse side of the Three-Cent Nickel is quite simplistic, dominated in the center by the coin’s 3-cent face value. The coin’s face value is indicated by Roman numerals. Partially surrounding the face value is a nice, ornate wreath.

For collectors, the only Three-Cent Nickels that will make it into a collection are those that have been graded. Because these coins are so unique, they are also susceptible to being forged. As such, collectors need a professional grading service to certify that the coin is, in fact, authentic. Below we will list the different coin grades as well as what they mean for the appearance of the Three-Cent Nickel.

Uncirculated: Three-Cent Nickels determined to be of Uncirculated grade are those that have never made it out into the open market. Basically, from the moment these coins were minted to the present day, they have been in safekeeping. As such, they appear to be in absolutely pristine condition.

Extremely Fine: A coin worthy of an Extremely Fine grade is one that probably never entered circulation, but is also in great condition. You might notice a minor flaw or two, but all in all these coins will be in excellent shape, especially for how old they are.

Fine: A coin worthy of the Fine grade is one that spent a good bit of time in circulation, and will show signs of that time. From light scratching to some minor chipping, these coins will definitely show that they exchanged hands. Still, all of the raised imagery and lettering will be intact.

Good: Good is the worst grade a coin can receive, and is indicative of a piece that was very heavily circulated. Due to the coin having exchanged hands many times throughout the years, these pieces will have had their raised aspects smoothed significantly. Still, these pieces are highly sought after by collectors.