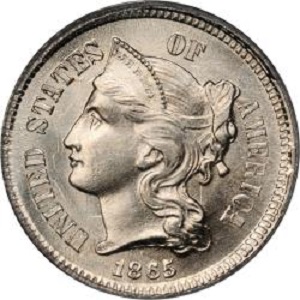 Three-Cent Nickels were produced for white a few years, however the 1865 variety is especially valuable to collectors due to it being one of the first issues. Seeing as there is only a finite number of these coins still available, now is the best time to add one to your collection.

On the obverse side of the coin you will find in the center a raised depiction of Lady Liberty, facing leftward. Surrounding the image of Lady Liberty is a raised inscription which reads “United States of America.” The 1865 year of minting is also present on the obverse. It must be mentioned that both the reverse and obverse sides of the coin feature outer edges that are reeded.

The reverse side of the nickel is also quite simple, with a Roman numeral 3, marking the three-cent face value, in the center. Surrounding the face value is an ornate wreath, depicted in incredible detail.

For collectors, when it comes to coins as old as the 1865 Three-Cent Nickel, condition is everything. While many of the coins on the market today are quite worn, this does not stop collectors from seeking out the pieces that have been well-preserved throughout the years. Below, we will walk you through the different coin grades as well as what they mean for the appearance of an 1865 Three-Cent Nickel.

Unciruclated: A coin that is determined to be of Uncorculated grade is one that, quite literally, never spent any time on the open market. As such, these nickels will be in absolutely flawless condition. The only flaw of sorts is the fact that the coloration of the coin will gave faded due to its age.

Fine: A Three-Cent Nickel that has been graded as Fine is one that definitely saw time in circulation, but managed to avoid a large amount of wear and tear during that time. The coin’s raised imagery, such as the Seal or face value indication, might be home to some scratching and smoothing, but all major features of the coin will be easily deciphered.

Good: If an 1865 Three-Cent Nickel is given a Good grade, this means that it was quite heavily circulated over the years. The millions of times these coins likely exchanged hands has resulted in a lot of chipping, scratching, and smoothing. Many of the major features might be significantly worn away.