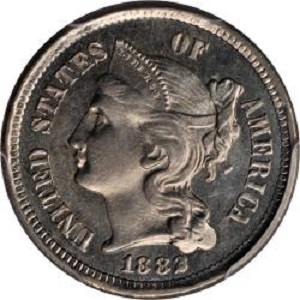 Coins minted as far back as 1882 are always going to fetch a high asking price, but when they are unique as the 1882 Three-Cent Nickel, that asking price goes way up. The reasons for this are many, but when it comes down to it, the Three-Cent Nickel is an extremely unique coin that was only produced for a very short period of time. With the number of these pieces available decreasing steadily, there has never been a better time to get your hands on one.

As far as the coin’s appearance, the obverse side of the coin features in the center the leftward facing image of Lady Liberty. Lady Liberty looks just a bit different from the Statue of Liberty, but the quality of the engraving is second to none. Surrounding the central image is a raised inscription which reads “United States of America.” Beneath the central image and inscription is an indication marking the 1882 year of minting. It must be mentioned that the outer edges of both the obverse and reverse sides of the coin are reeded.

On the reverse side of the 1882 Three-Cent Nickel, the center is taken up by a raised inscription marking the 3-cent face value. What is unique about this face value indication is that Roman numerals were used. Rounding out the reverse is the image of a wreath, which is partially surrounding the face value.

Uncirculated: A Three-Cent Nickel that is determined to be of Uncirculated grade is one that never made it out onto the open market. Having never exchanged hands, and instead having been kept in safekeeping, these coins will show absolutely no signs of wear and tear. All things considered, these are the best of the best.

Extremely Fine: An 1882 Three-Cent Nickel that is determined to be of Extremely Fine grade is one that might have never been circulated, but is also not free from damage. Though the damage you notice on these pieces will be very minor, it is still taken into consideration during the grading process.

Fine: A coin that is graded as being Fine is one that was probably circulated for a period of time, but taken out of circulation before it could incur too much damage. You will notice light scratching and some chipping, consistent with a coin that exchanged hands many hundreds, and even thousands, of times.

Good: Good is the worst grade a coin can receive, and means that the Three-Cent Nickel in question will show plenty of signs of wear and tear. From deep scratches to the complete wearing away of some raised surface features, these coins will have definitely seen their better days.