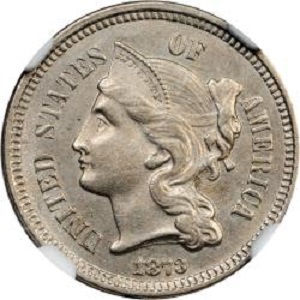 There are very few 19th century coins that collectors do not want to get their hands on. The Three-Cent Nickel is especially sought after by collectors for a few reasons, but mostly due to its obscurity. If you know anything about US coins, you know that the Three-Cent Nickel is no longer being produced. In fact, it hasn’t been produced in more than 100 years. As such, there has never been a better time for collectors to get their hands on them.

On the obverse side of the 1873 Three-Cent Nickel, the main featured image is that of Lady Liberty, depicted looking leftward. The image does not skimp on detail, and that is especially impressive when you consider just how long ago the coin was minted. Surrounding Lady Liberty is a raised inscription which reads “United States of America.” Beneath the central image is a marking indicating the 1873 year of minting. Finally, it must be mentioned that both the obverse and reverse sides of the Three-Cent Nickel feature reeded outer edges.

The reverse side is a bit more simplistic than the obverse. In the center is a raised marking, indicating the 3-cent face value. This is marked by a Roman numeral. Partially surrounding the face value is a fancy wreath.

Uncirculated: An uncirculated Three-Cent Nickel is one that, by definition, was never put into circulation. Because these coins did not exchange hands on a daily basis (or ever), they do not show any signs of wear. Put simply, these coins are in absolutely pristine condition.

Extremely Fine: A coin graded as being Extremely Fine was also probably never circulated, but somewhere along the way accrued a bit of damage. In some cases, the damage is so minor that it cannot be made out with the naked eye, but it will be uncovered during the grading process.

Fine: A coin graded as being Fine is one that was circulated for an extended period of time, but taken out of circulation before it incurred too much damage. While you will definitely notice some light scratching and maybe even a few chips, these pieces are still in somewhat decent shape, especially when you consider just how old they are.

Good: Good is the grade given to coins that have been heavily circulated and, thus, heavily damaged. The damage on these Three-Cent Nickels can come in a variety of different forms, but you will most often see significant smoothing of the raised features as well as some scratching and chipping.

In order to determine a price for the 1873 Three-Cent Nickel, you really need not look much further than the coin’s condition/grade. Being that even the smallest bits of damage can dramatically influence the price the coin will cost, grade is a huge factor in determining price. Beyond that, the scarcity of the coin comes into play too. While all Three-Cent Nickels are scarce nowadays, smaller mintages during certain years may make one issue much harder to find than another. Below is a chart that will help you understand the price you might be asked to pay for an 1873 Three-Cent Nickel given its condition.