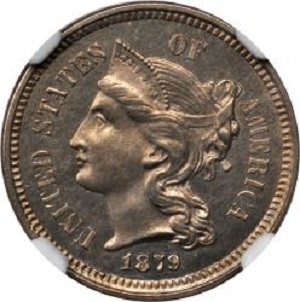 The US Mint has produced many unique coins over the years, however few are more intriguing in the eyes of collectors than the Three-Cent Nickel. Not only does this coin feature a face value that has not existed for well over 100 years, the coin itself is so old that there is an ever-decreasing quantity available. This means that there has never been a better time than now to get your hands on one of these pieces.

On the reverse side of the coin, you will notice that there is little more than the coin’s face value. The face value is situated in the center of the face and is written with Roman numerals. Surrounding the the central face value is a wreath.

For collectors, having the 1879 Three-Cent Nickel in your collection is great. With that being said, collectors are only going to settle for the most well-preserved pieces. As such, you will find that the only Three-Cent Nickels worth collecting are those that have been graded. Below, we will offer an outline of the different coin grades as well as what those grades mean for the condition of the Three-Cent Nickel.

Uncirculated: Uncirculated is the grade given to 1879 Three-Cent Nickels that have never been circulated. These pieces have been kept in safekeeping from the moment they were minted, and because of this have avoided most every sign of damage typically associated with coins so old.

Extremely Fine: Extremely Fine Three-Cent Nickels are those that were likely never circulated, but do have a minor flaw or two. These pieces will feature a few scratches or maybe a chip or two, but apart from that will appear to be in mostly pristine condition. Naturally, collectors love to get their hands on these.

Fine: Fine is the grade given to coins that have been circulated extensively, but do not have entirely too much damage. On the faces of the piece you will definitely notice plenty of light, consistent scratching, but none of the raised imagery nor lettering will have been compromised.

Good: Good is the worst grade a coin can receive, and is indicative of an 1879 Three-Cent Nickel that has been heavily circulated. These pieces will have exchanged hands hundreds of thousands of times, so much so that some of the raised imagery and lettering might have been worn down quite a bit.

When it comes to determining the price of an 1879 Three-Cent Nickel, you really do not need to look much further than the condition of the coin. Because these pieces are so old, even the most marginal differences in condition can mean for major differences in price. Below exists a chart that is aimed at giving you a better idea of what you might be asked to pay for a graded 1879 Three-Cent Nickel.